Most all of my train hopping trips are pretty un-eventful... I get on the train I want, and it takes me where I want to go with little or no problems... This would not be one of those trips.

So I had planned on heading down to northern California to visit my friends at the BBCRC and help with some projects, hop north to Klamath Falls, OR and take a round trip ride on the Modoc Northern, and then head back to Portland. My trip started with a car ride to Medford, OR and a bit of hitching from there to Ashland, OR and then on to Weed, CA.

After about 4 or 5 days in Weed just kind of hanging out with people and relaxing it was time for me to head back up north toward Portland which wasn't really my original plan but due to record heat in eastern Oregon I decided to put off the Modoc trip. 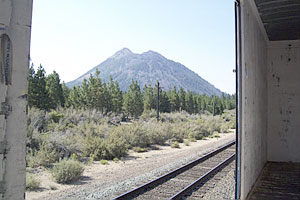 To say the least I was a bit worried that I was going to have to head south to Dunsmuir or north to Klamath Falls to catch a train since I had only seen one stopped northbound train at the Black Butte siding in a 48 hour amount of time but sure enough on the morning that I wanted to leave a stopped M-RVHK (Roseville to Hinkle) train stopped at the North Black Butte siding with many empty boxcars and three units on the point, I grabbed my pack and was offered a ride up the track by NBF, I spotted my empty boxcar and ran for it since I didn't want the oncoming southbound train to spot me getting on, after what I believe was the Z-BRLC train passed us we started the trip north to K-Falls.

We made some really great time between Black Butte and K-Falls only siding once at Andesite for another southbound.

Upon getting into K-Falls we stopped on main 2 which is often a good sign and I flipped on my scanner, I heard that they would be adding six inactive DPU's to the point for return to Eugene, OR. This operation took about 3 hours and then we headed out of K-Falls bound for Eugene, and Portland. 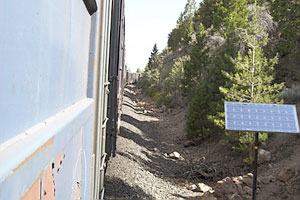 Everything was fine till we hit the Mowich siding which is about 87 miles north of K-Falls. I was napping when we stopped at Mowich and I woke to a stopped train so I didn't get to hear if the air was bled out, and I was unable to see if the units were still with me or not and after sitting there for about 3 hours with hearing nothing on the scanner I started to worry that something was wrong and maybe we set off the last defect detector or something so I decided it would be good to check on the units so I moved up the train with my pack to another empty boxcar closer to the units and as I got closer I could hear them and that was good to know that they were still there with the train, I got in the an empty boxcar closer to the units which was about 20 or so cars back. 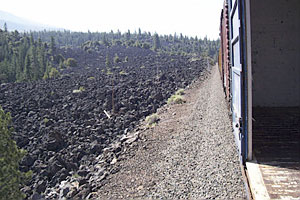 I sat there for about an hour just wondering what was going on with the train and still nothing over the scanner when I hear a crunching of ballast outside, I figured it was the conductor walking back for some reason so I was going to ask him what was going on since trains do not normally stop at Mowich for that long without another train passing them. I look out and what do I see about 25 feet away but a fucking black bear and my heart almost stopped it seemed like and the first thing I thought of was that you scare off black bears and you play dead with grizzly bears so I started to yell and jump in the boxcar to try and scare him off and he just stopped walking, sat up on his butt and snorted at me... At the time he seemed like the hugest bear ever and I really didn't want to see if a bear can get into a boxcar so after more yelling he started to walk towards me kind of fast so I threw the rice sticks (like trail mix) I was eating as far into the woods as I could and he chased after them, I grabbed my pack and ran to the next car a head of me which was a tanker car and climbed to the top of it, I had about 20 cars to the units and they were all tankers, gondolas, and woodchip cars so I thought it would be best to walk the tops to the last unit and get in and after what seemed like an endless amount of time of crossing over cars I made it to the last unit, got inside and almost passed out...

I know throwing food at a bear is not the right thing to do but in the moment I didn't think otherwise and riding the units is not something I ever do... Maybe DPUs but never the units on point but after a run in with a bear that is not afraid of people I would have gladly jumped into the backseat of a bull's SUV instead of going toe to toe with a bear in a boxcar.

Up in the unit which was one of the inactive DPU's added in K-Falls it felt like 115 degrees inside of it since it was all closed up... I just sat there on the floor sweating bullets for about 30mins and then for no reason we started to move and all I could think was thank God!!!

I had planned to head back to my boxcar at the next siding so I wouldn't be found in a unit going into Eugene but we didn't stop 'till we got to Minnow which is about 24 miles south of Eugene and that's when things got worse. 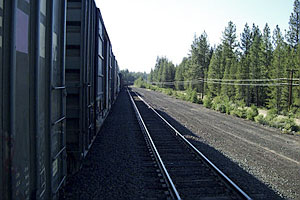 By this time it was about 2:00am and I looked up to see a truck parked near the first unit and two people get out and start walking back with someone from the train which I assume was the conductor and I am thinking to myself "fuck... I am getting a ticket at least" and that's when the conductor flashed his lantern into the window of the unit I was in but they all kept on walking and I could see them start to check the cars behind me one at a time... Did the conductor know I was there and gave me a chance to bail? Maybe... and they just what I did, after they were about 10 or 15 cars back still checking cars I ran off the unit and jumped in the bushes and just laid down, after about 10 more minutes they returned to the units and started to check them all and I heard them opening all the doors and slamming them shut.

So there I lay in the tall grass about 30 feet away from the units with the special agents standing right next to the train and right near me as the train airs up and starts to move forward slowly, as the train was passing by they seemed to be using their flash lights to check the cars and after the train had passed us they gave an "all clear" over the radio and went to their truck and drove off.

I spent some time just sitting there thinking how much this sucks and in general feeling like crap. I saw the glow in the distance that was Eugene and I started to walk toward it... It really did feel like one of my most lonely walks ever which was even more compounded by my flashlight batteries going dead...

After about one hour of walking in the dark I flagged down the first car I saw and asked for a ride and they were kind enough to give me a ride into Eugene. They dropped me just a few blocks from the Amtrak depot so I just bit the bullet and when inside and spent the $22 on an Amtrak Cascades train to Portland.