We drove deep into Mexico on September 18, 2005 for two lofty reasons. The first was to scout investment opportunities for Americans. My road partner, Tom "Diesel" Dyson is a contrarian financial journalist. The second was to hobo a freight through the Copper Canyon that our Grand Canyon could be dropped into and lost. 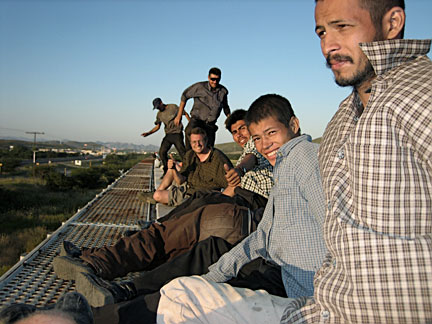 The onset was threatening. Mexican Immigration is a morass that provided us seven-day tourist permits for a two-week trip. At the first federal PeMex gas station, an attendant jacked the pump ten bucks and we were coerced to pay within a circle of glaring Sonora state workers. A day later in Chihuahua and an hour before our dream freight would depart, we returned after supper to the car and discovered the window pried open. Diesel stood under a lamp gaping at the loss of everything he'd brought in one stolen pack. We shrugged it off and improvised a bedroll wrapped burrito-like in a tarp. I feel lucky and streamline, he admitted.

Earlier in the afternoon, we had scouted the elongated Chihuahua yard by driving directly to the center security shack where my partner explained in fluent Spanish that we were rail buffs who travelled the world taking pictures of old locomotives. The guards dropped their jaws and denied permission but provided sufficient train information, plus we cased the yard going in and out.

It s easy to catch a fast freight before it starts. The first step is intelligence: train time, track number, and spot. We'd been told that each midnight on a single main line one freight departed for Las Moches on the Pacific. We could snap pictures from atop the west yard bridge... Or latch on under it. Beneath, we found a Mexican trampa nursing a little jug of wine till train time. He offered none but, better still, told tales of Mexico's iron roads.

He rode the rails from job to job like the original American hobos. "It is my passion, senores!" he swore. Each freight has dozens of trampas who will treat you with the same respect you show them. He first illegally entered the USA by foot, and rode freights to Washington state to knock apples. He was caught and jailed for one year to work inside to earn a ticket back to Tijuana. He rolled up his trouser cuffs and sleeves to display no telltale prison tattoos. Therefore he was a square fellow with the advice to gauge other trampas in the same proportion to their marks. I bargained from $20 to a few pesos to take his picture smoking a homemade against a steel wheel while philosophizing. One learns to enjoy time rather than let time enjoy you. I tried for a second shot and he lunged since the deal was sealed. Travel has long been the symbol of independence and freedom. I sidestepped and we all chuckled.

He drifted off when a security guard approached from a nearby parking lot twirling a screwdriver in long fingers. Don't worry, he cautioned. I just want to practice my English. Thus we met another deported Mexican. "This country is so overmanned with manpower that every rich family and tiny shop hires a security guard. We work at small wages until a coyote is afforded for $1500. I always use one. The package is that a Mexican coyote takes you across the border to meet an American coyote who escorts you to a big city. Then you're free to bus to anywhere".

"There are many ways to cross the border illegally: by foot through the desert, over a border town fence, jump a canal, wade the Texas Rio Grande, or with fake or borrowed documents right through Immigration. Nothing happens the first few dozen times you're caught. They drop you at Mexican Immigration on the border and they let you go. Why not? We have done nothing wrong in our country except to strive for something better". He had lived in Omaha for one year before a chance traffic violation exposed a forged driver's license plus Green Card, so he was deported. The forgeries are easy to buy on American large city streets for $200 and $150 respectively. They pass muster until the numbers are run on a computer. He loved Omaha and, looking over a shoulder at the cracking parking lot, gushed, "In one month I will have enough money saved to hire a coyote to return home to Omaha".

We parked the car in a safe spot for the long run and returned to the bridge. Barking dogs with rattling toenails on flat house roofs jolted to mind a hobo proverb: hark, hark the dogs do bark, the tramps have come to town! Two other Mexican trampas reclined beneath the bridge waiting for the midnight dirty face. We circled them in the dark to slip over a gondola side parked next to the main rail. A debate of strategy soon shook the walls. My mode is to penetrate a yard before a train departs to board safely. Diesel lays in wait until the freight rumbles the outskirt to avoid the bulls. He prevailed tonight when at once the ground and gondola trembled and a locomotive headlight pierced the night. We dropped over the wall into the hobo world.

"It's going fast!" screamed Diesel as the fourth engine huffed past. We sighted the approaching car ladders and already I was sweating. "Twenty mph too fast", I yelled. "Certainly not!" and he sprinted for a rung, grabbed, and pulled on. I normally would have let the following ladder pass, and the rest, to wait all night for another train. Instead, with partner in mind, I ran and seized steel and dragged aboard.

Two gringos stood on opposite ends of a decrepit graincar bound for the Copper Canyon and celebrated each other's victory. The two-way radios didn't work for some reason. Each end had a large metal platform for sightseeing and a portal the width of a man's shoulders. That entered a short passage to three hotel rooms like steel pup tents inside the bulwark. The pulpit and rooms make the graincar a favorite of Kings of the Road. The freight rambled through Chihuahua Centro, past goliath buildings and park statues, and picked up speed at the suburban flank to be swallowed by agricultural fields inclining toward the Sierra Madres.

I knew he was settling even as I, into a room for the night. There is no better sleep than a freight that shakes and rolls like a cheap motel vibrating bed. There's no phone, doorbell or interruption to put in another quarter.

Daybreak cut open the portal with a muffled voice, "Bo, wake up!" My head smacked the steel ceiling. "Our car is cut!"

I tumbled out and down the ladder to see our train disappear in the west. Diesel chased it and returned cursing. We chose one damn car in the 100 that was a bad order. That's poor speculation! On scrutiny, our graincar owned a faulty couple so was ditched in the weeds as we snored.

The lesson is don't hobo a car blanketed with bad Spanish graffiti. Our ride through the Copper Canyon vanished in the morning sunshine. I noticed a wedding band on Diesel's finger where last spring in Canada there had been none. Yes, he finally announced this daybreak, "I got married!" He accepted my belated wedding gift of toilet paper that I knew he'd forgotten. We cinched the packs and hiked the track west. A pueblo materialized thirty minutes later with a local bus stop and gawking locals.

Later that day, we paid $35 each to ride the second-class passenger train through the canyon. We washed in the clean lavatory, drank iced sodas in the dining car, viewed scenery through the hard glass, and slept on the dainty cushions. Somewhere in the mountains, the passenger train glided by our lost freight with the trampa we'd met in Chihuahua and dozens of others on top waving their shirts. Diesel buried face in hands and mumbled, "That's where we want to be!" It was silently agreed that we'd reverse in Las Moches and try again.