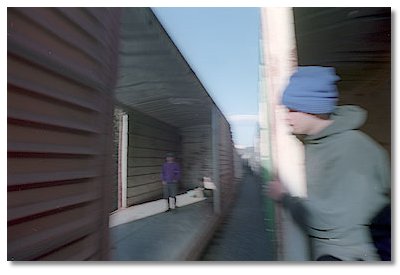 I drove to Dunsmuir, parked my truck and walked to the jungle near the south end of the yard where I was to meet Sam Glen and ride up to Eugene. Naturally, a northbound left just as I was parking my truck but I did the ½ hour walk to the jungle in good spirits because, for once, it was a beautiful day - clear, warm, no wind, rain or snow. We made ourselves comfortable, taking great care not to get dehydrated in the dry, rarefied air. The OAPTT came in at 6:30 pm but no rides that we were interested in, just closed plug doors on the head end and pigs on the rear. To perk up our spirits (get it?) during the long wait Sam walked to town to get a 12-pack and made it back in 45 minutes - a world record! We let the LABRF go by (all pigs) and finally around 9:00 pm the RVKFM pulled in. Stumbling around in the dark we found an open boxcar but someone was sleeping in it so we started to walk back to look for another car. Not finding any nearby in the damp gloom, we walked back up to the "occupied" car and, as cheerfully and politely as we could, asked the sleeping tramp if we could share his car. After some incoherent mumblings he agreed, and we hoisted ourselves aboard. It being pitch black in the box, we tried to paint a "word picture" of ourselves as friendly, non-threatening riders who were just looking for a dry car, while at the same time allowing a mental picture of our companion to form, who remained a dark blob in the corner. We all agreed that riding alone was the best policy, especially in these times of serial killers running amok on the rails, and the three of us practically bent over backwards assuring everyone else that we meant no harm. With these amenities out of the way, Sam asked the tramp if he'd like one of our recently-scored beers, to which the tramp enthusiastically responded, "Man, I'd KILL for a beer right now!", to which he quickly amended "Oh, I didn't mean it like it sounds...", providing us all with a good laugh in light of our previous discussion. We spent about an hour standing around in the dark, drinking and telling tramp stories before we left town at almost 10:00 pm.

Had a rocky ride up to Klamath, where we bailed at 1:45 am and got a room at the Maverick Motel, enjoying a great, if brief, sleep. "Did breakfast" at Gino's and found out there was supposed to be a northbound at 10:00 am. It pulled in "on the advertised" but sat in the yard until 3:00 pm, much to our chagrin. A perfect day and a smooth ride over the Cascades brought us into Eugene a little after 10:00 pm. Got off early because the bull was spotlighting the train and walked up to the departure yard to catch back. Saw power on a southbound but it looked like the Modoc man so we let it go - no rides except one grainer that would have been uncomfortable to sleep two people on. The string of cars next to it had gons with rebar on the head end, so we walked back to look for an empty boxcar, which turned out to be a major career move later that night. Found one a few cars from the end so climbed in and went to sleep.

We felt satisfied with our choice when it started to rain sometime during the night, but the next morning found us in the same place, after nearly every other train in the yard had already left. Accepting our fate because, even though we were still in Eugene, at least we were dry, we hit the store for supplies and returned to our "immobile home" to eat, drink, read the paper and wait for our train to leave, which it finally did at 11:00 am.

Now overcast with occasional rain, we're slowly making our way up the western slope of the Cascades, and I mean "slowly". Stopping numerous times for no apparent reason, we finally grind to a halt about 5 miles past Oakridge and back down into the yard, swapping our ailing power for fresh units from a work train. Slow but uneventful ride up to the summit with the rain steadier and the swirling mists beckoning me to climb into my bag and get some shut-eye, which I did at 5 pm. As we expected, the crew died before we got to Klamath and our train was tied down at Chiloquin to wait for a new crew. Now working on some sort of a record for sleep, I greeted this news with a yawn and flopped back down in my bag. 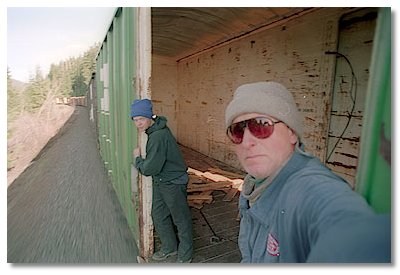 We arrived somewhat belatedly in Klamath just before midnight and got parked in the yard, as if the outbound crew were taken by surprise by our timely arrival. The last trip I made from Eugene took only 5½ hours - this one took 12½! Dozing off out of sheer fatigue from sleeping too much, I awoke finally thinking that we ought to roll up and go find out when this or any other train was going to leave town and, as luck would have it, the instant Sam swung his pack on and jumped from the car I saw the crew bus bearing down on us. As Sam dutifully clambered back in I hoped the outbound crew would have an easier time getting our lumbering train over the rails to Dunsmuir than the last crew. After some switching that seemed to take forever we crawled out of town at 2:00 am in a light rain.

Now faced with the thought of even more sack time I dozed off as best I could until we stopped at Black Butte to let Amtrak go by. Shortly after that we were run around by the PCX and a few minutes later by a junker! Eventually we left and Sam and I reluctantly dragged ourselves out of our bags and rolled up our gear as we dropped down into Dunsmuir through the damp, misty canyon, hopping off near the freeway at 9:15 am. It felt so good to walk again that we practically broke into a run on our way to the Nutglade for coffee. I first marked up in our boxcar on 4/17/97 and had to add two more dates by the time we got out but it was a very pleasant and certainly "restful" trip.