On a Friday, I quit my job. The following Tuesday, I was in Weed, looking for a freight. Maybe I was meant to be an unemployed train-hopping bum after all.

For 8 years I had been eyeing the Siskiyou Line, "rare miles" that I long coveted. It runs from the northern Cascades, into the Siskiyou Mountains, and ends up in Rogue River country. Until 1926, it was Southern Pacific's mainline to California. But, seeking flatter terrain, SP opened the current main through Klamath Falls in 1926 and downgraded the Siskiyou. By 1955, passenger trains had stopped running here forever. Complicating matters even more, the SP sold off the line in 1992 to a minor operator, CORP. Information is correspondingly harder to gain.

I was being graciously assisted by the legendary and secretive North Bank Fred. For 28 years he has been riding freights and photographing them beautifully and, now, near the end of my Western vagabonding days, I had finally met the man and his constantly present bottle of White Port.

Fred provided invaluable backup: getaway driver, chase driver, photographer, intermediary with crews that I am too constitutionally shy to approach. He banished the usual hardships so completely that I began to feel slightly guilty. 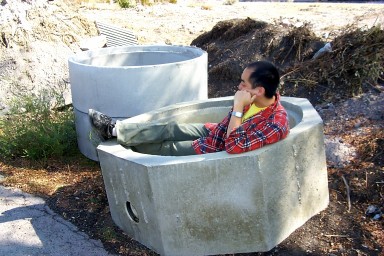 Weed may be the perfect freight-jumping location in generally hostile 1999. You can stay in Motel 6 a few hundred feet away, buy your provisions at Ray's Food Place, and catch your ride behind Ray's. There is no bull, not even a fence. The day before, Fred and I had watched UP hotshots in nearby Dunsmuir, and in stark contrast to the mid-1990's, we hadn't observed a single rider. The bad publicity and corresponding police crackdowns have been too intense. "It's not fun anymore," Fred had remarked poignantly, and I agreed. I guess two train-jumping serial killers in 3 years were more than the market could bear.

After some paranoiac misgivings that the units might have gone to Medford "light" (without freight), we pieced things together. The freddy got slapped on the train, it began to take off from Ray's Food Place, and I poised to catch my ride.

Catching a moving boxcar is such an engrossing exercise that I seldom perform it. The floor is chest-high and there is no ladder. As my target rumbled by, I grabbed a hanging latch with both fists, chinned myself above the floor, and swung into the car. Now I had 2 open doorways for scenery, each of them 10 by 20 feet.

Riding behind logs that would soon be turned into planks, past hot, golden ranchland and away from domineering Mount Shasta, I spotted Fred's wife and waved to her. Every few miles, on the roadside or an overpass, I spotted Fred with his camera. This was one peculiar hoboing trip.

I had to wonder about the future of the Far North regional economy. The people here live off what comes out of the ground, and environmental pressures are building. Silicon Valley, where I lived for 9 mixed years, is driven by ideas instead of bulk commodities, and something of the sort seems destined to hit the Far North. 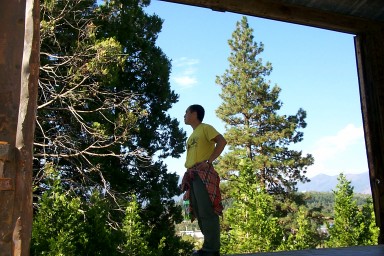 The tracks are old and only rarely did we exceed 25 mph. In addition, for an hour, we sat in mid-route at Hornbrook, CA, doing I know not what. I did know that a Medford-based crew would take over. Furthermore, 3 more units were hitched on, so we had 7 to haul about 30 cars. That fact illustrated the hilliness of the route. But, to accomplish these tasks, did the crews need an hour? If you compare railroading to the uppers-popping mania of trucking, the former appears stuck in a lordly, 19th-century rhythm it cannot afford.

Eventually we regained life and began climbing into Oregon, into the Siskiyous, where the intense heat gradually broke. Broad, sunlit valleys, some of them farmed, some of them not, rippled out and away, toward ponderosa-studded mountains. A Buddhist prayer temple with pennants, incongruously situated up here, loomed distantly. The engine-taxing 4% grades of Bailey Hill caused great gusts of diesel fumes to attack me in the tunnels, an ordeal alleviated by the entrancing horizons and the single, prodigious trestle we crossed. 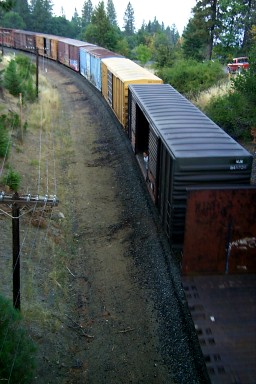 Several hours behind schedule - one is always late, whether on Amtrak or on freights, so you might as well ride freight for free - we approached the fruit-packing warehouses of south Medford. First we sailed past artsy Ashland, where subdivisions for the newly comfortable are springing up, like everywhere else in the West. One of the houses had a helicopter pad, complete with helicopter. Almost all of them had the TV going.

Medford is the hub of a small-potatoes railroad without a bull, but it happens to be in Oregon, which has just enacted the toughest anti-hoboing law in the country. Railroad trespassing is now a Class A major misdemeanor, punishable by up to 1 year in prison and $5,000 fine. The $50 fines and overnight sentences of the golden age are probably gone forever. I could have risked my hide, ridden 2 additional days just to reach Eugene. But I don't know anybody there anymore.

Not wanting to be a test case for the new law, I briskly bailed out under the McAndrews overpass and climbed into Fred's getaway truck.

That was it for Abdul Rahimov. Much has changed since I began my heavy-duty vagabonding in 1991. It was an unforgettable decade, but the hoboing climate has grown significantly worse - admittedly, we may have spread our tales on the Internet too gleefully. On the professional front, I never found what I sought here and will almost certainly move to Washington, DC. The East has its virtues, but scenery that sings to the heart is not one of them. Goodbye to the West. I loved you.