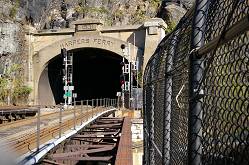 On a fine Saturday I finally jumped a train of opportunity rather than leaving town to find one. I nearly ended up being run over by a car for my pains later that night.

During the decade of my wretched exile, I occasionally have seen trains stopped for clearance in Silver Spring. That happens only a few times a year; SS is no regular place for hopping a freight. July 3 was such a day. When I reached the platform of the elevated Metrorail station, I saw an idle westbound stack train on the parallel CSX track.

I was heading to the museum and wearing only shorts and a T-shirt. However, I decided to put my money where my mouth was and ride into the sunset for once rather than rationalizing inwardly that I had other plans.

I exited the subway station, even though I had already paid the fare, and began scurrying along the barbed-wire-topped fence in pursuit of a breach. With the uncertainty of freight operations, I didn't know when the thing would "air up."

CSX had done an excessively thorough job of patching up fence holes, so it took a while to find a spot where someone with similar intentions had laid a wooden plank over the barbed wire, allowing train-hoppers literally to walk the plank. I toppled off into the brush at one point but dived into the well of a stack car just as the train resumed motion. 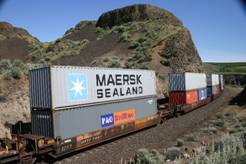 I'd done this route a couple times before, once having reached Braddock, PA, after being clouted into several minutes of full blindness by a stupid bit of carelessness. I still have a slightly enlarged left pupil as a souvenir.

The stack train took a while to reach full speed, crossing the Beltway near the Mormon temple, passing along Antique Row in Kensington, and paralleling Metrorail's Red Line before crossing over I-270 and heading into the cornfields and thorny woods beyond the reach - so far - of the government-industrial colossus that has gone on steroids since 9/11.

For the first time in four years, I was leaning against a container with the sun and wind in my face when the Amtrak Capitol blew past in the opposite direction.

In this era where the informant is king, one has to assume that the other train crew will report you. My momentary enjoyment vanished as I began mentally preparing for the run-and-hide routine.

My suspicions seemed confirmed when the train abruptly began slowing down. I took the first opportunity to run into the woods. Several more times in a few miles, the train stopped, and each time I sweatily waited it out in the woods. My legs collected an assortment of gashes and scratches from the thorns that I plowed through.

Yet law enforcement never showed up, nor did a crewman, and the train kept shoving west in fits and starts. Maybe my panicky interludes in the forest had been for nothing, but they did keep every other train crew from spotting me in the roofless stack car.

In down-at-the-heels Brunswick, where a small CSX yard and a weekdays-only commuter train station coexist, I jumped off after another stop and walked into town along the street. The sun was pounding down, and shopper traffic through the few storefronts was meager.

Finally, I reached the head end of the train, where the engineer and brakeman were pondering an opened hatch on the unit. That sight was reassurance that the train had been operating with mechanical problems, not under a hobo alert.

I viewed exhibits at the C&O Canal visitors' center, ate a passable though overpriced lunch at a Mexican joint near the commuter train station, and contemplated how to return home without the humiliation of hitchhiking.

CSX downgraded the yard decades ago in favor of Cumberland, so only a fraction of trains were likely to halt here. I didn't much want to hang around in the humidity and heat hoping for a train to do me the favor of stopping. Two fully loaded coal trains with units attached but headlamps off stood ready for action, making me wonder how many more hours or days would elapse before the engineers showed up.

Only 41 miles out of Silver Spring, I was stranded without access to an internal combustion engine. The old New Yorker train-buff columnist E. M. Frimbo once complained that most of the country has knocked the carless back into the Pilgrim era by providing no public transit.

I vetoed trudging 16 miles to Frederick to catch a Greyhound. Then I slowly realized that the parallel C&O Canal towpath led to Harpers Ferry, where I could catch Scamtrak the next morning. It was a shady 5.8 miles away. A bike would have been handy, as would have a couple gallons of water, but I plodded toward the old Civil War flashpoint.

Meanwhile, people possessing better planning skills and lacking my mania were hooting and hollering aboard tubes and rafts down the Potomac. Periodically I sat enviously on the bank with my aching feet in the water or reached into more thorny bushes to yank some blackberries.

Two and a half hours after setting down the trail, I crossed the Shenandoah and Potomac rivers' confluence into the town of fiery John Brown.

I devoured two scoops of ice cream and had dinner and a beer. Having nowhere to stay, I went off into remote darkness, climbed over a chain near some gloomy structure under restoration, and lay down abjectly in dirt. But it was pricklier than I liked, from whatever weed grows there, so I moved to what I figured was a railroad service road unlikely to see any vehicles that night, since it was miles from any yard and nearing midnight. I sprawled into a fetal crouch for the second time.

It wasn't much longer when some inexplicable motorist came blasting down the road much too fast and nearly ran right over me. Since I was too uncomfortable to sleep, I was alert enough to jump out of the way.

The vehicle stopped in the middle of the road; I walked over to the driver's side to say something, but the car roared off. It was too dark to tell even whether it was ranger or civilian, man or woman, inside, but only the ranger would have called the real cops, who came zooming out from town in 10 minutes.

They were courteous enough because I didn't sound like most vags found sleeping in the dirt. But they weren't courteous enough to stop from calling in my driver's license for outstanding warrants and looking for narcotics and weapons in my backpack.

"What happened to your legs?" one cop asked, as his flashlight played over the lacerations.

"I was hiking," I answered, rather than blurting out, "I was running through thorns from bulls who didn't exist!"

Eventually, they let me go, telling me that staying around the locked-up train station was a better course of action. The road where I nearly became a mysterious hit-and-run statistic was NPS, not railroad, property, they said. One seldom hears police telling him to hang around a train station overnight.

I spent another familiarly dull night without gear, lacquered in sweat and bug repellent and huddled on a bench waiting for dawn. It came, not fast enough, along with the hateful East Coast waves of heat and a flock of voracious, defecating Canada geese. With hours to go before the 11:25 am train to DC, I rode the blessedly air-conditioned NPS shuttle bus to different battlefields around Harpers Ferry and hiked where nearly 150 years ago less fortunate men in wool uniforms had slaughtered each other.

Scamtrak came along, only about a half-hour late - remarkable punctuality by its standards, especially for a train from far-off Chicago. As an encouragingly large group of us waited for the air-conditioned ride on the cushions, a hiker asked, "What happened to your legs?"