In 1992, a Southern Pacific inspector - a workman, not a bull - had evicted me from a unit in Grand Junction, CO, without bothering to call the bull. But 20 years and 9/11 had passed, making such benign results unlikely now, and I never wanted to be caught if I could avoid it. I went into the suffocating, pitch-black crew bathroom with my frame pack and shut the door.

Indeed, less than a minute later, the inspector stomped into the unit and flipped on the lights. He was looking for mechanical problems, not for trespassers, so he never bothered to open the bathroom door, sparing us the low comedy and jurisprudence that would have ensued if he found me standing there like a mummy.

Even with the danger over, I sat in the dark for several minutes to put some distance between me and the yard workers. Once I timidly emerged, I doused the lights and drowsed in the engineer's chair for the rest of the night.

Dawn came shortly before we hit Green River, a small town and another crew change. One of its minor claims to fame is that Maj. John Wesley Powell and his insanely courageous team started their raft-splintering exploration of the Green and Colorado rivers here in 1869. Like many historic railroad towns, it has a Taj Mahal of a former train station, the second largest in the state. The passengers disappeared years ago, but now a baleful Union Pacific control tower sits on top of the old depot.

During the crew change, I again went into the bathroom. A unit inspection was unlikely so soon after the previous one, but it pays to be conservative. I let long minutes pass before returning to watch the sandstone bluffs recede. By now the sun was back in force, heating up the unit. 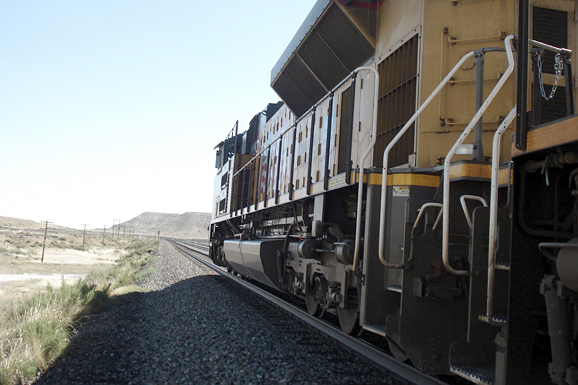 Thirty miles west of Green River, in desolate Granger, we reached the Ogden-Pocatello fork and turned southwest for Ogden. Well, my destination had just been decided, to my slight disappointment.

We chugged along in more bleached waterlessness for hours, far slower than all the hotshots with their highly valued containers, until the landscape started to look as if it might have rained in the past 10 years. 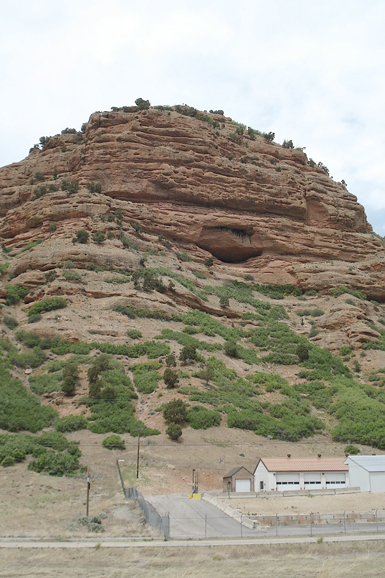 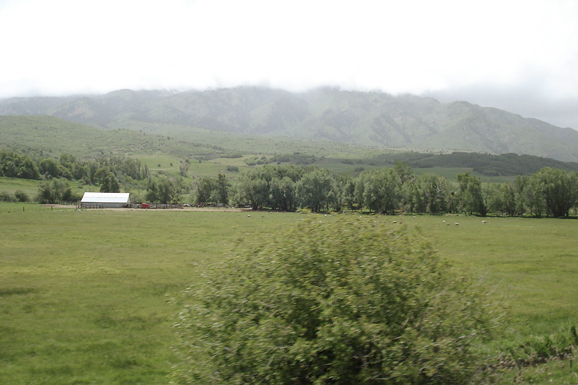 I was tired from the irregular sleep, though certainly far less worn down than I would have been from riding a freight car. Population density was building up, and the regular ducking away from potential informants grew old. It was a relief to lumber into Ogden, about 21 hours after I jumped aboard in Cheyenne.

You don't want to be spotted on or near a unit when the train pulls into the yard. As soon as the decelerating train would permit, I flew down the crewman's ladder and into the tree cover along the yard.

Leaving the railroad property, though, turned into a challenge. The Ogden yard has a river running along it, still raging and snowmelt-swollen in June, even if I were desperate enough to try fording it. I stayed in or near the trees until finally breaking through to 31st Street. Crossing overhead on the sidewalk-less bridge as cars hissed past, I watched white trucks zooming up and down beside the unit I had deserted. They contained the guys I had no interest in encountering.

Within an hour, I was riding the commuter train south to Salt Lake City, a welcome 4-year-old improvement on the plodding UTA bus that used to be the only transit option for the 38-mile trip. During the next few days, I tore around in a rental car, nailing down the Great Salt Lake (my first swim there in 36 years), Golden Spike NHS, Flaming Gorge NRA, Timpanogos Cave NM, Fossil Butte NM, and other sights. But they couldn't make me forget the choices that have me riding a Western freight once every 6 years rather than 6 times a year.