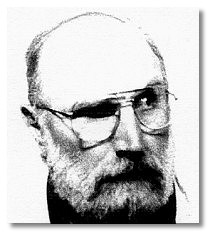 I imagine myself a Life/Artist, documenting a non-art life with various media, primarily photography. I employ mass media for the distribution of this documentation; the mass medium of the international Mail Art network, where I am known as buZ blurr, a pseudonym appropriate for my work in my other mass medium, the railroad network of the North American continent.

As a third generation railroad man, who hired out in train service in 1962, I was aware of a long tradition of boxcar graffiti. In fact there were broadcasters within the railroad system long before Marconi's radio. Romantics mythicized that these signature tags and character drawings were the work of hobos, but the most pervasive and persistent authors were trainmen, usually in the larger rail centers of big cities. The apparent omnipotent chalk marks, with a central origin, were transient and not the graffiti artists. Of course hobos did indulge in this activity, including Jack London, who chalked his moniker, Skysail Jack, on trains he rode.

I resisted the temptation of the blank spaces on the railcars until seniority permitted bidding on a Long Field position in my hometown yard. In November 1971 I began to make drawings on the railcars. In early 1972 I discovered the existence of the Mail Art network and began playing in that field. With these two outlets of ephemera I felt I had found my audience, albeit captive. I have participated, as performance, in these arenas ever since, using image, language and the page.