In August of 1984 I made my third trip out to Britt, Iowa to see the National Hobo Convention. Friends I had met during the last two conventions, Hobo Bill and Mountain Dew, had already passed away, but I hooked up with El Paso Kid in South Saint Paul and we rode down to Mason City together, then hitched over to Britt. In the second part of these photos there is a picture of him dishing out soup with a bandage below his right knee. This was from a nasty fall he took down a set of basement steps when we dove through a window in an empty house near the jungle trying to escape the demon hordes of mosquitos one evening.

I kept a few copies of the Britt News-Tribune that featured photos of the Convention and stuffed them in my pack before we left to hitch back to Mason City and head up to the Twin Cities to get on the High Line back to California. The ride back, along with 18 years of being stuffed away in a drawer, made it difficult to get good scans of the 13 newspaper photos, but you can still read the captions if you squint. 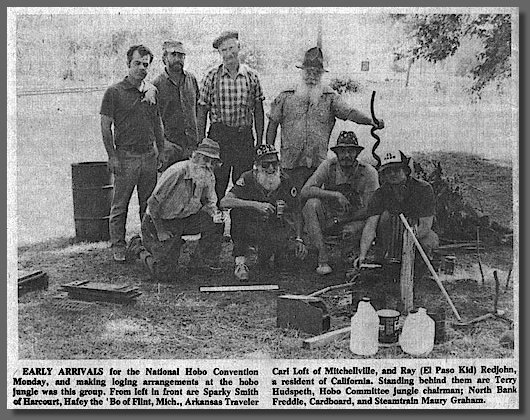