This year's gathering was indeed a Mongolian Cluster F__k if there ever was one. Sheriffs coming into camp with shotguns and dogs, making up laws (that didn't exist) that we were somehow guilty of "breaking", threatening anyone in town with a backpack on (including backpackers and fishermen), ripping open people's bags of food, pouring water on sleeping gear, tearing up Food Stamps... all of this before we even had the chance to "set up camp". Rather taken by surprise at this show of force (and because we were "outgunned" by a ratio of 4 shotguns to none), we gracefully "relocated" to good ol' Black Butte, where in a matter of moments the party was in full swing. Behind the scenes, as it were, was a "tramp lift" reminiscent of Berlin - a sea of humanity (and the odd canine) had to be schlepped up the 20 or so railroad miles to Black Butte, where a suitable gathering site was agreed upon by general consensus. With a degree of "innovation" common only to those who ride the rails, "found items" were converted into every conceivable appurtenance and a "community" was born.

Our joy was slackened the next morning when everybody realized that they had to get back to Dunsmuir for the parade and Hobo Film Festival, so the "tramp lift" was begun again and various splinter groups who camped at different locations were re-united. We "did" the parade and all met later at the Community Center for the showing of Sarah George's film, "Catching Out". You couldn't have asked for a more appreciative audience! Afterwards we were again faced with the logistics of moving our mobile town back up to Black Butte for the traditional Saturday night party, the details of which are rather ill-defined at the moment.

The next few days were a blur (in many ways) with people leaving throughout the day and night for points unknown. A small group of die-hards kept the party going for several more days until we were politely asked to "vacate" by Randy, the UP bull. Friday was dubbed the official "cleanup" day, and Larry and I made our rounds to all of the official and semi-official camp sites to spiff them up and haul the detritus to the dump. Summing everything up, Larry made a good chunk of change redeeming all of the beer cans, there were no babies born (that I know of), Whistle Britches broke her ankle and had to be rushed to the hospital in Jet Set John's "ambulance", Clare was also hospitalized with a heat related illness, a tramp who's name I forgot would also have needed to be hospitalized if a group of us hadn't "re-hydrated" him, Wes made pancakes that all future pancakes will be judged against, and Meathead (the dog) walked away with the prize for the "Most Intimidating Collar" (Canine Division) and, of course, Lee was the unanimous choice in the Human Division. Below are two groups of 10 pictures I took during the gathering: 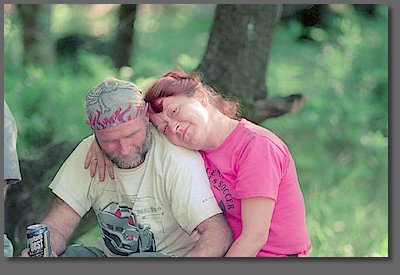 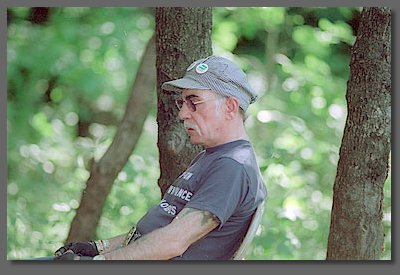 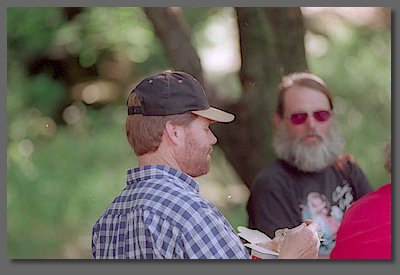 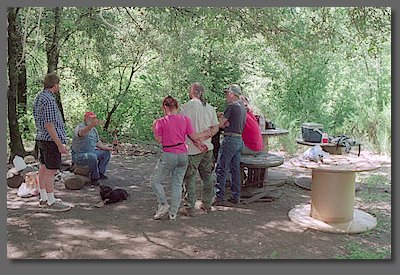 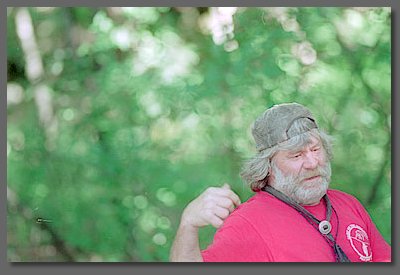 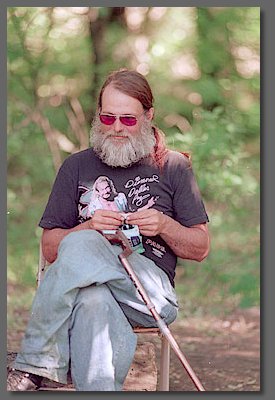 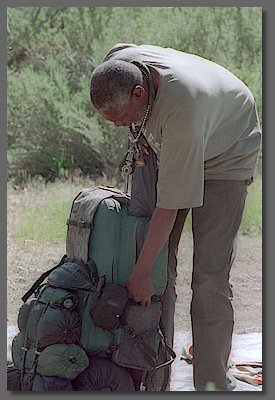 New York Slim trying to remember what's in all these bags 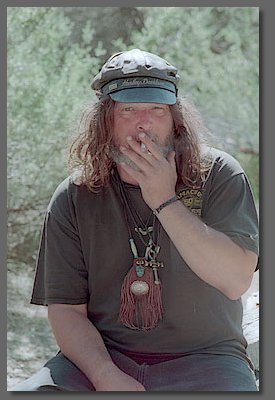 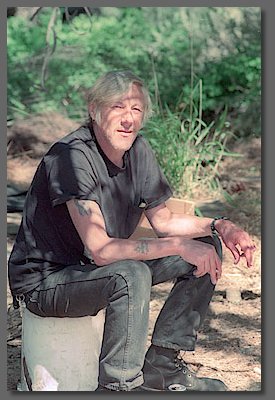 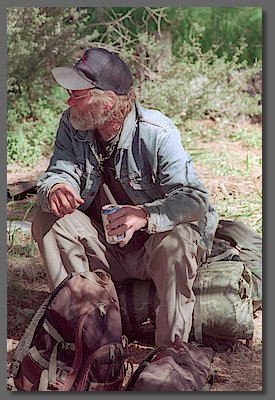