Art "Wiz" Tyde returned to his loving wife after the rail trip, they divorced, and he left Linux-Care to start Sputnik Communications. He bought a condo in the Philippines. Omid "Big Apple" Malekan, in the old American tradition of leaving the girl to hit the rail, returned a bachelor to New York but failed to shake the cigarette habit. He works at a startup fund and trades client money as well. Bryce "Clown" Bradley won All-Canada comedian honors using material from the hobo trip, and quickly took off on a career as a globe-jetting gold broker. 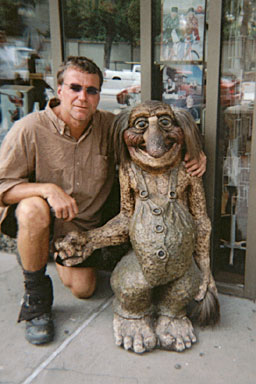 Brian "Pronto" Molver awakened me on his San Francisco couch following the Executive Hobo Trip. It was the morning of September 11, 2001 that I was to fly to New York City. "You can go back to sleep," Pronto alarmed. "The office just called me... Terrorists bombed the World Trade Center and your flight's been cancelled. I'll be busy for a while."

September 11 shook the nation as well as hobodom clear to the Roseville, Ca. bridge. Homeland Security police rousted a bridge "troll" there who told the press, "It's all over! The whole thing. The police want everybody out, and you can blame 9/11 for it." Railroad security clamped down nationwide, bulls proliferated, railroad town newspapers denounced open boxcars as conveyance for terrorists, and tramp numbers plus the good hobo name plummeted to the lowest in decades signaling, some claimed, the end of a hobo epoch. The executives slid in under the wire.

In balance, I tell everyone that as long as trains run executives shall ride. Four years after this grandest hob trip in history and 9/11, in 2005, two more dynamic executive trips would dawn: One through the Canadian Rockies and another across Mexico's Copper Canyon.

This original story was contracted to a cannonball editor for a glossy national magazine but, as you see, 9/11 derailed that. So read this account in the hobo spirit and, if you get to Sparks as I recently did, check the growing message, America: CARPE DIEM!

His vicissitudes parallel Buck the dog's in Jack London's Call of the Wild. Raised in loving confines, Bo Keeley later battled around the world of adventure that led in 1997 to the trail-less outdoors. He is a man built like a scarecrow with baggy clothes and a Jack-o-lantern smile with the wisdom teeth long gone but remaining memories, some of the best from railroading. Six years ago, thinking there wasn't much left to do, Doc Keeley, moved to the American southwest desert and discovered otherwise, a peaceful place Buck never reached. He lives and writes from a burrow behind his rickety house. Sample more writings at www.dailyspeculations.com and www.greatspeculations.com.

Freight hopping is potentially dangerous and is illegal, and the author, executives and publisher don't condone that anyone engage in an illegal activity. The usual penalty for getting collared by the bull is being ordered off the premises or a petty trespassing charge. The author and publisher recommend that no one hobo without permission from the railroad. Historically, freight jumping is encouraged to transport seasonal laborers who run the same risks as executives.

What the Executives Took Train Hopping

Cars they Rode or Explored

The venerable Boxcar or "empty" is the standard hobo ride. It's out-of-sight yet there's a "window" or open door, the equivalent of a wide-screen TV. Bulls don't much care if tramps hold down boxcars, gondolas and covered hoppers, but regularly kick them off piggybacks, container cars, double-stacks, and definitely the units. You can string a hammock across a boxcar, or once I played handball since it's the right length until the ball flew out the door. The floor is five feet above the ballast making getting on or off "the fly" dangerous.

Coal cars are open-top gondolas with V-bottoms that unlatch to release coal. It's a dirty ride and everyone talks about the bottoms releasing but It would be rare and I sit on top on a tarp and tie myself to the side. Coal cars are usually strung in a mile-long "unit" train going from or to the mines

Container cars are similar to piggybacks except without wheels. They haul overseas or intra-country merchandise. There's usually a well in which to sit at the end of the container on the flat car, and it's advisable to take the rear one to avoid a shifting load in an emergency stop.

Double-stacks are containers mounted two-high on a flatcar.

Engines are the most comfortable rides in poor weather where you sit in the cab or hide on the deck of one of the "trailing units" behind the lead one. These are boarded either with permission from the engineer, or secretly after the crew has checked the locomotives before the train pulls out. The cab has all the high comforts: heater, light, bathroom and fridge stocked with bottled water. Also called the "power", units or locomotives.

Flat cars are emergency choices to ride off which I've lost gear and also been nabbed. Always tie everything down including yourself.

Gondolas resemble rolling shoeboxes without lids and haul pipe and scrap. Of all cars, this is the most touch-and-go for "shifting load" - the third most frequent killer of tramps (after boarding "on the fly" and "silent rollers"). The sides vary from waist to above-head high and have the advantages of an out-of-sight and windless ride, but they can make the car an oven on a sunny day.

Lumber cars are flat with a vertical lengthwise center piece to which lumber is secured. At either end is a phone booth size area that can be ridden for short hops.

Oil tankers and some others have only a ladder and 2-foot bumper to ride, so they're inadvisable.

The Portable parking lot or automobile carrier has two tiers with, nowadays, impenetrable mesh all around. The older unenclosed carriers were favorites for 'bos to sit in the pickup beds or car seats and listen to the radio or stereo with the heater on during winter. The automobile ignition keys are often taped where tramps know where to look. Sometimes autos are vandalized so if the bull nabs you on one it's usually straight to jail. There's a window sticker with the vehicle destination, a big help if you know where you're going.

The Piggyback is a flatcar that carries semi-truck trailers. One leans against the big tires and views 360-degrees of rolling scenery under the trailer belly. The piggyback doors are sealed and bulls frown on pig riders, so hobos secret between the rear wheels. I've also ridden side-saddle shielded outside the tires through hot yards. Things blow around and away on "pigs", so rope everything down.

Hobo argot is lavish, and these are the terms the Executives used and heard: