In late December of 1980 I caught out of West Oakland to go to southern California to spend Christmas with my family. I had a pretty good scam going - living in northern California, my folks would send me an airline ticket to fly me "home for the Holidays". I would turn the ticket in for a refund, and take the "Gray Ghost" down the Coast Route, leaving Oakland around midnight and getting into Los Angeles the next morning. At that time PSA only wanted about $50 to go from the Bay Area to LA, but that $50 bought me a lot of wine and food for the journey. My plans were upset, however, when I learned that there had been a derailment on that line, and no trains would be running for a day or so. Not wanting to miss "Christmas with the family", I caught a train to Roseville the next morning, hoping to switch to a southbound valley train from there. Carrying a small Brownie camera hung from my neck, I bolted from my slumber under some truck trailers in the West Oakland Desert yard as the head end of the train came by at a crawl [below]. 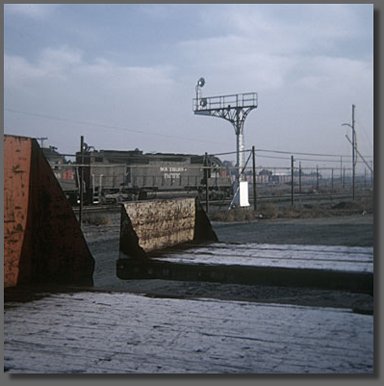 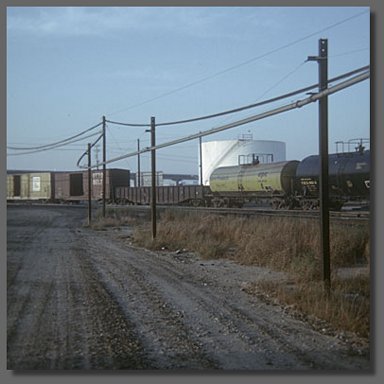 As soon as the power passed my "hiding spot", I saw a couple of empty boxcars, calling to me like "Sirens of Olde" [above] 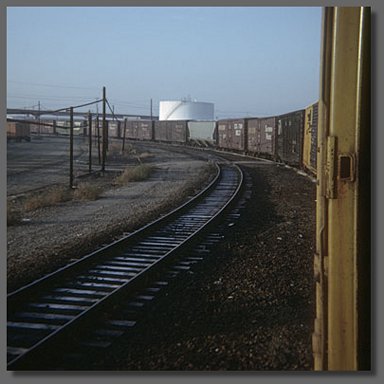 Nailing the second one, I looked back and didn't see any more rides [above] 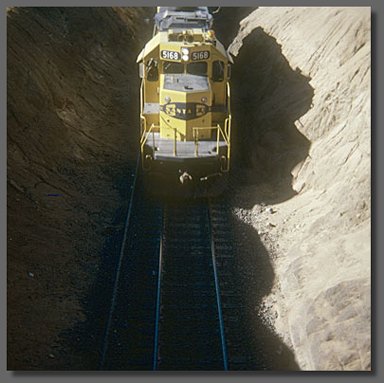 Had the basic ride to Roseville, then caught a train down the valley, where we stopped at the Tehachapi Loop to let a Santa Fe hotshot pass us. The picture above was taken from on top of the tunnel.

Having time on my hands during the meet, I ran downhill and got a picture [above] of the train winding around the loop. 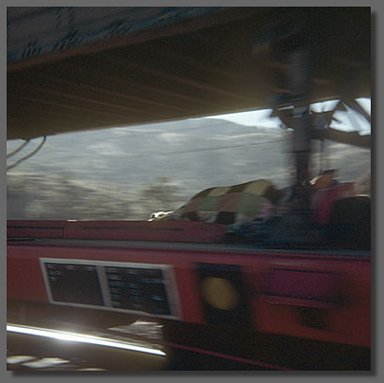 Near the end of the Santa Fe train was a tramp sleeping under a trailer [above]. Made it home in time for Christmas, but my Mother couldn't figure out how I got so dirty after a one hour "plane ride"...