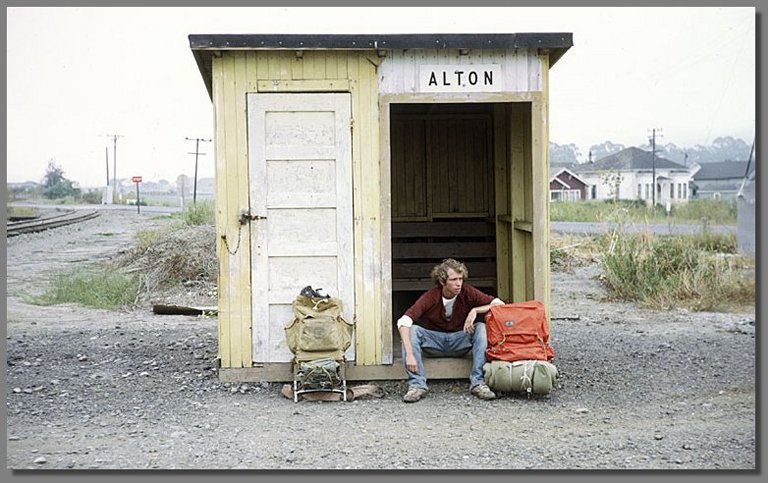 August 1972 — This was an ill-fated trip from the get go. Somehow I ended up heading south from Eureka, CA after hitching in from points un-remembered. I met the guy in the picture (above) and we decided to travel together. I knew that the Northwestern Pacific Railroad ran from Eureka to Santa Rosa (where I was going) and we could see the tracks on the other side of the highway as we stood there for hours (and hours). After standing in more or less one spot all day long we decided to sleep in this small building near the tracks and "wait until a train came by". After an incredibly cramped night's "rest" I stumbled outside and took this picture, with the mainline going from left to right behind me and the Carlotta Branch curving off to the left. We never caught (or even saw) a train, and ended up hitching the rest of the way. Years later I learned that the train we wanted left from a mill just a few miles down the highway from where we stopped for the night. 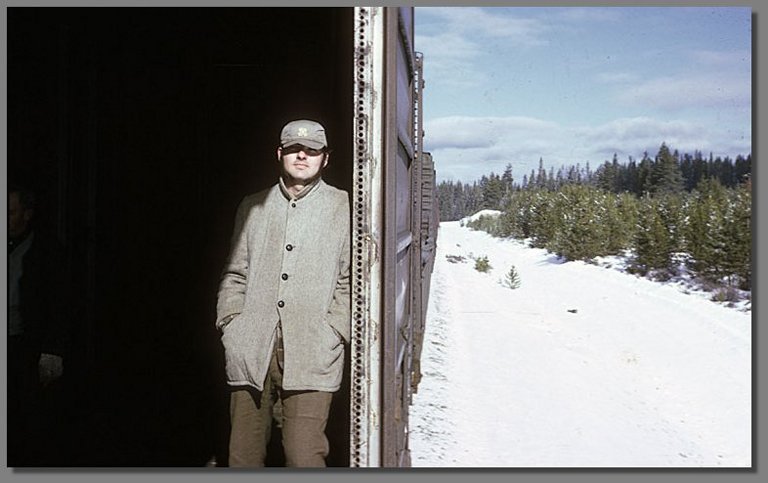 winter 1972 — Probably my first "winter" trip. A great opportunity to at least find out which elements of my gear "didn't" work in cold weather train trips (i.e. just about everything). After waiting all day in Bend for a southbound I finally bagged an open boxcar, which was already occupied by 4 tramps. They didn't seem to mind a 5th passenger and soon we were headed down to Klamath. The guy in the picture (above) had no gear (actually, none of them had any gear) so I let him wear my coat and hat while I hunkered down in my sleeping bag. 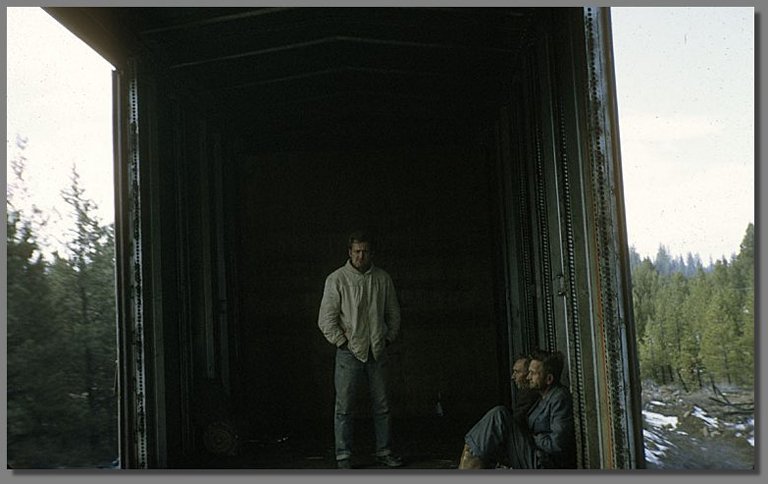 As it got dark I became a little nervous sitting in my down sleeping bag while the other tramps gave me the evil-eye as they shivered in their clothes, but the night proved uneventful (for me at least) and we all woke up alive the next morning. 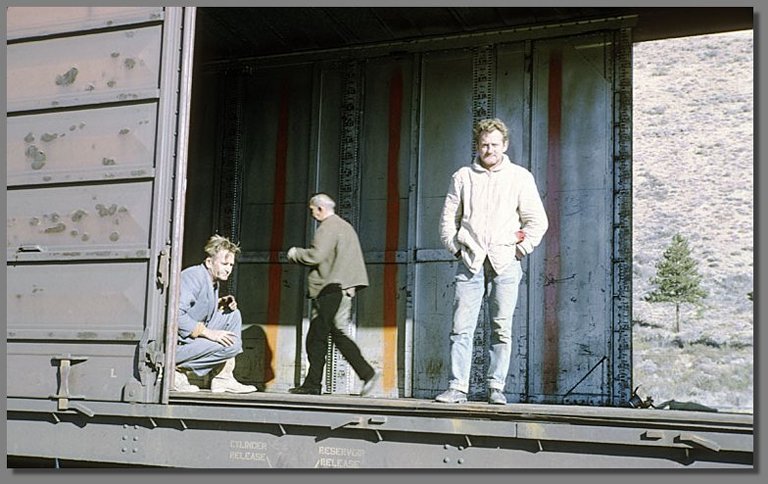 Here we're stopped next to the midge-infested Klamath Lake (above), about 10 miles north of Klamath Falls. Upon entering the SP yard we all got rousted by the bull (Roger?) and the guy with my hat and coat was taken to jail on an outstanding warrant, which put the kibosh on me ever getting them back, as the cop at the jail wouldn't buy my story that they were actually my clothes and I was just letting the guy wear them temporarily. 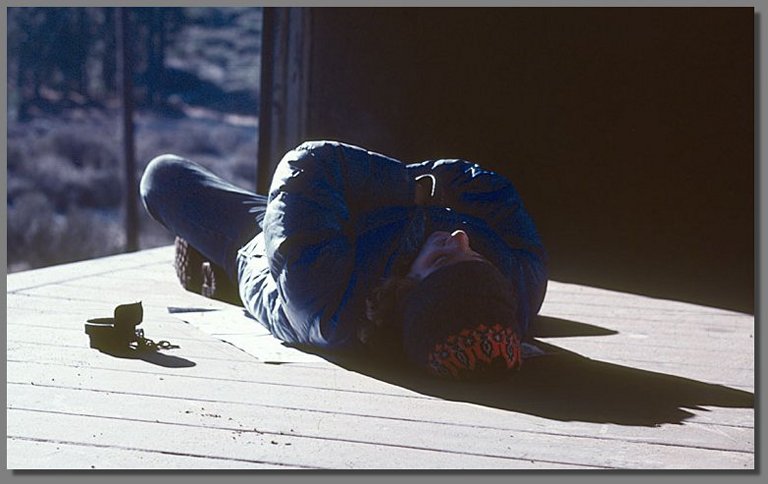 December 1977 — Having gotten a few more "winter" trips under my belt, a friend of mine and I decided to ride the Siskiyou Branch from Black Butte to Medford, which was then operated by Southern Pacific. Naturally we arrived at Black Butte just after the one-train-a-day left, so we had to crash in the woods and try again the next day. After a chilly night, the picture (above) shows my friend vainly trying to warm up in the first rays of morning sunlight. 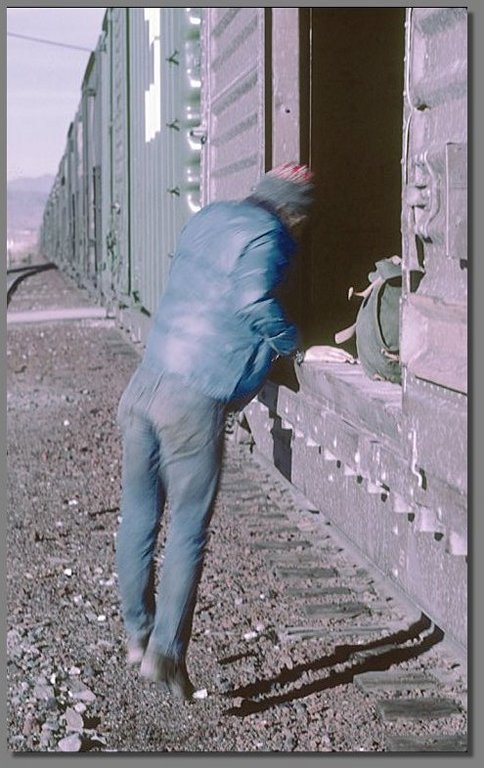 We had a nice slow, rocky ride up the Shasta Valley where we (or the train crew, anyway) stopped for beans in Gazelle. As much as we were looking forward to finally being on a moving train, an even greater urge overtook us, and after a foodless night at Black Butte we bailed off and followed the crew over to the cafe. Our mounting hunger surpassed any worries that the crew would know we were on their train and call the cops, and we carefully ordered a repast that could be quickly scooped up and doggy-bagged as soon as the crew finished their lunch, as they were about 10 minutes "ahead of us" as far as eating went. After they seemed to mercifully linger over their food, while we wolfed down ours, an orderly procession was made back to "our" train, and I snapped this picture (above) of my friend hopping aboard as we left town. 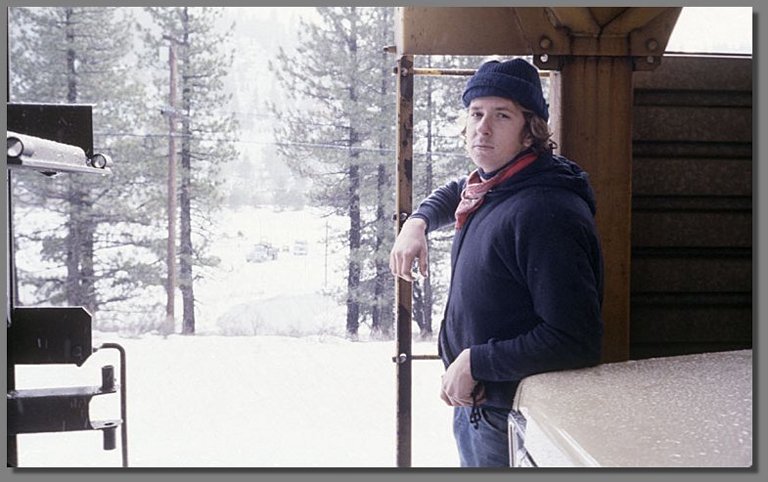 January 1978 — Regaling in my newly-aquired knowledge of how to ride trains in the winter without freezing my ass off, I talked my brother into accompanying me on a (well-supervised) winter sojourn from LA up to Oregon. We caught out of LA's Taylor Yard shortly after Christmas Day and, except for one of the most spectacular face-plants-after-detraining I've ever seen (courtesy of my brother), the ride up north went smoothly. Unfortunately, the ride back didn't... Briefly, leaving Klamath coming south we ended up on a Salt Lake train that turned at Roseville (while we were sleeping) and headed east over the Sierras. The picture (above) shows my brother with a bemused expression after long hours of me explaining to him how "these things happen" and "think of the fun we'll have" to a deaf ear. 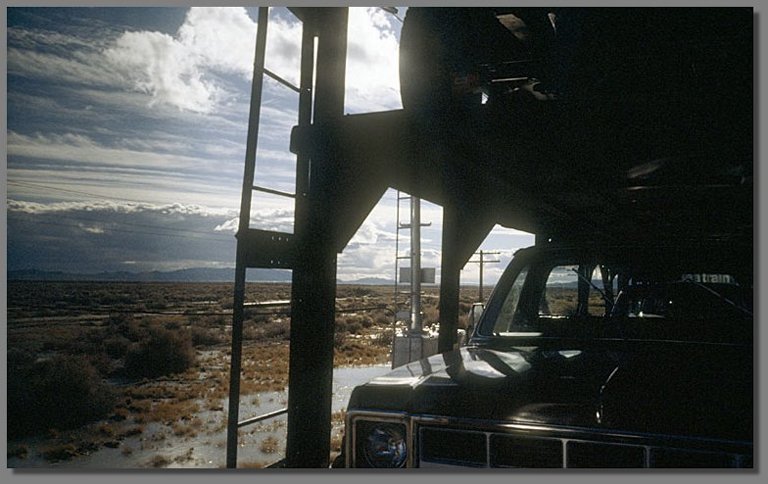 Apparently the sheer joy of trainriding (and some of my wine) convinced him that we should press onward to Salt Lake, and we were rewarded with views similar to this (above) most of the way across Nevada. To our good fortune, the cars were unlocked and we at least had heat and FM radio to ease the boredom. To top it all off, we got to spend New Year's Eve trying to catch back west from the Roper Yard. 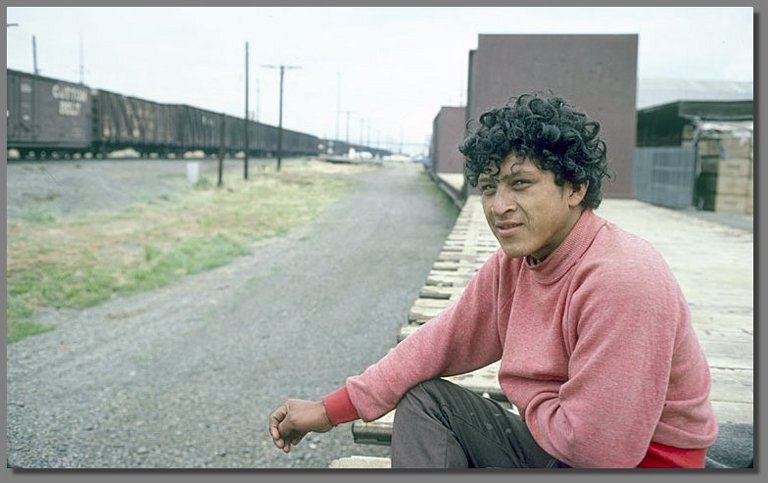 July 1978 — My grasp of the Spanish language is second only to that of a lizard, but this guy and I had a great ride from LA up to Roseville. Totally streamlined, he approached me at Taylor for information on getting up to the apple harvest in Washington. Well, knowing something and telling somebody about it are two radically different things, but aided by the soft, sandy soil in the yard (plus hours of waiting and lots of wine) I was able to take a twig and draw a railroad map of the Western United States on the ground that would impress Rand McNally. Whether he made it or not I don't know, as I bailed on the fly at Elvas Tower and never got a chance to say adios. 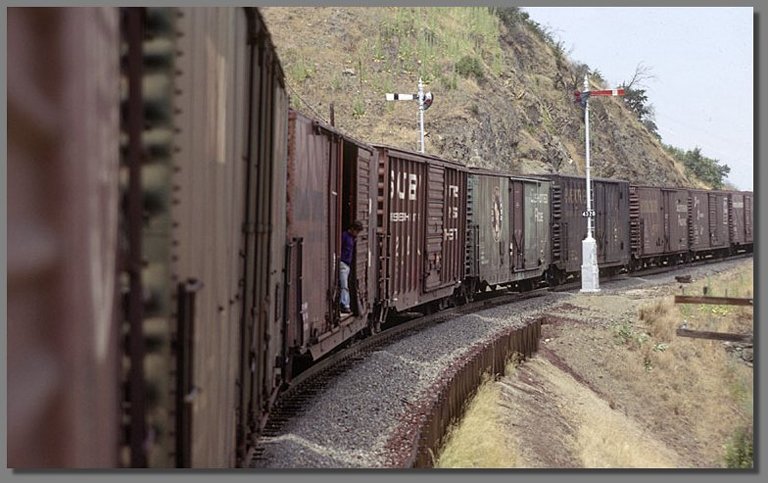 July 1978 — The Siskiyou Branch of the Southern Pacific Railroad (now operated by Central Oregon & Pacific) has been a favorite of mine for years. It goes through very scenic country, has tunnels that still have rock interiors (not concrete), and the crews are friendly. Currently there are numerous locals that connect one end (Black Butte) to the other (Eugene), but when this picture was taken there was a through train that made it from Eugene to Roseville. This picture was taken between Ashland and Medford and shows another tramp riding a few cars ahead of me as well as the semaphore signals that are long gone.