Gerry Van Zandt and I planned to meet in Klamath Falls to try for the umpteenth time to ride the Modoc line. He took the cushions down from Portland and I was to get a boxcar out of Dunsmuir. From my journal:

Gerry and I hooked up at Gino's Market, a stop that should be included on any trip through here, at 1:00 pm. The location is perfect (½ block from yard), the food is good and cheap and if they sold White Port I'd probably marry Gino. You have to go down to Dickie's Mini Mart for wine (well worth the walk) but Gino's has plenty of beer and sundries. 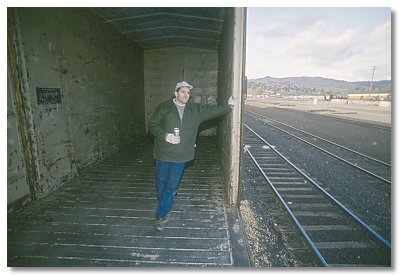 For once the Modoc train hadn't just left or been delayed by any number of natural disasters, and it was called for 2:30 pm. I walked it on the way to Gino's and found only two boxcars and no grainers - one of the boxcars was "occupied" by someone sleeping under about a hundred Army blankets and a small dog, and the other one was to be our "mobile home" for the next several hours. The afternoon was spent drinking, watching the snow fall and wondering when the heck our train was going to leave town. We got the shit scared out of us when, after just about nodding off to sleep, a tramp stuck his head in the door and yelled "Railroad Police!" at the top of his lungs. After almost banging my head on the roof of the car, I recognized who it was as a tramp I've talked to before in the yard and we all laughed. I promised to return the "chuckle" at my earliest convenience. Now there were three of us sitting around in the fading darkness - drinking and chatting about this and that. With the temperature dropping and now almost pitch black outside we rolled out our gear and about 7:00 pm the train left. 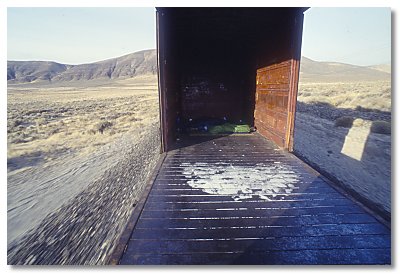 Nice ride with periods of medium rocking here and there. Stopped to change crew in Wendel at 4:00 am and got to Winnemucca at 9:30 am. Snowing off and on east of there, so we spent most of the time in our bags. Since both sides of our car were open, the floor in the center soon became covered in snow blown in by the movement of the train, and this "feature" coupled with the rocking that was now becoming more or less constant made walking over to the door to pee quite a thrill. We almost slept through Carlin but managed to bail in an efficient if not graceful manner at 1:15 pm. Walked over to the cafe behind the freight office and had another great meal, this one only half a notch below Gino's quality. Bundling up, we grabbed our gear and numerous sandwiches "to go" and headed for the market, which we were told was "a block up the street...". Several "blocks" later we found the market, but the ATM machine we were told was there wasn't. Re-directed to a truck stop that was twice as far away as we were told, I grabbed some cash and headed back to the market for some wine. After all this walking around in the snow, my heart sank when we discovered that they didn't have any Port, so we asked directions to another market that might. Again, our destination was "a block away...", and we set out once again to ply the streets of Carlin. After walking "a block" and not seeing anything that resembled a market, we asked some schoolkids walking by where the market was and were told that it was "a couple of blocks" further down the street. After finally arriving we were told the dreaded news - no rotgut wine. Not wanting to challenge my Utah record, I decided to "stoop" to buying JD and we were off to the freightyard.

My favorite little shack in the yard had been torn down, but we found another, larger one down by the ice house to hang out next to. There were several monikers from 1947 and 1948, as well as the date "1936" written inside - sort of cool. We sat down to re-hydrate ourselves and read the paper, but it had now stopped snowing and cleared up slightly, and as the sun set the temperature dropped rapidly. At 4:30 pm it was 28 degrees and since I couldn't turn the newspaper pages worth a dang with my gloves on, I was constantly putting one on and taking it off. By 5:45 pm it was 23 degrees and too dark to read. By 6:00 pm we gave up and decided to wimp out and get a motel room until midnight or so when the westbound Modoc train was due. Found a real dive near the truck stop and its only saving grace was a shower with so much water pressure that I was almost blown out of the shower when I turned it on. We watched dorky TV shows and napped until 10:00 pm, when we walked over to the freight office to check on our train. The guy said that it was about a half hour out so we motored back to the motel room and got our gear together, then walked down to the yard and a few minutes after we got there the train came in. We spotted an empty boxcar near the headend and were drawn to it like moths to a flame. 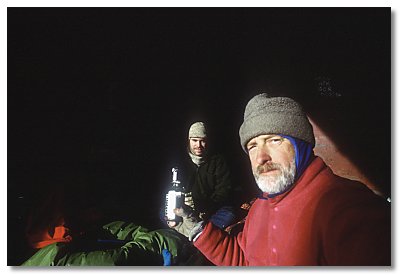 After switching around a bit we left town at midnight, went through Winnemucca at 4:00 am and got into Wendel at 9:30 am. The Milepost Inn is indeed boarded up, but we learned from the inbound engineer that the crew should be here by 9:45, so we wandered around the yard for awhile. I found a date nail from 1900 and several tracks in the yard had rails dated 1901 and 1910. The crew arrived at 10:30 and we left town at 11:00 am. Had nice ride with the usual amount of rocking (i.e. almost constantly) and got into Klamath at 6:00 pm. Gerry hit Gino's for supplies and went back to our boxcar to continue on up to Eugene and Portland, and I hung out waiting for a southbound. At 8:30 pm the PTOAT came in and I got on the back of a hopper. We left at 9:15 pm and got to Dunsmuir at 11:45 pm after going through snow most of the way, a really quick trip back considering we even went in the hole twice and it usually takes 4 hours.

It was a great trip but the timing and weather made "sightseeing" out the doorway unpleasant because of either darkness or snow blowing in, not to mention just cold overall. There were only two open boxcars on the eastbound train and when we passed the next day's train at Flanigan there was only one that I saw. If you have to wait in Wendel for the crew to rest you'll do well to bring a good amount of reading material, as well as food and beverages, cuz there ain't much "there" there. There is a wooden building near the water tank that would make a great "hobo hotel" but don't build a fire or trash it because that's about it as far as facilities go.

Below is Gerry's account of his trip back up to Portland after he left town in "our" boxcar:

After we said our goodbyes in the yard about 7:30, I headed back for the car we took from Carlin, and, realizing it wasn't going anywhere fast, decided to roll out my gear and go to sleep - seeing as it was dark out. I awoke at about 1:00 when the air went up and, darned if it wasn't snowing outside at a pretty good clip.

We finally left the yard about 1:15 a.m. and as the car rattled I slept most of the way into Eugene, getting into the yard about 7:45 a.m. There were numerous tunnels on the way into Eugene. I drank two containers of water stolen from that Conrail unit back in Wendell, and rolled up my gear as we came thru downtown Eugene. Typical Sunday morning, not much was happening. Not knowing the Eugene yard situation well, I hopped off just after the first overpass as you enter the receiving yard. Three or four tramps were camped under the overpass, just beginning to stir after a long night of Thunderbird-drinking. Seeing their condition and having a bit of extra water I tossed them the remaining four bottles to a grateful chorus of "Thanks!!"

After getting off my boxcar Pullman I slogged down the entire length of the Eugene yard, passing two or three towers, a group of wetbacks huddled in blankets (wanting to know which way to "el Norte?") and a drunk tramp on two crutches (½ full port bottle tucked conspicuously in his outside coat pocket!) who was mumbling something about leaving his stuff at the mission. As I approached the curve in the center of the yard, I came across a string of four crummies, which I subsequently investigated. Two were open and pretty trashed inside, evidence of some hardy tramp partying !!

Slogging onward down the yard, I came to the departure yard and the two overpasses. About this time, it started raining pretty hard, so I knew I had to find some shelter quick. There were three strings of cars in that yard, so I found an empty one-eyed bandit and sat inside, reading Duffy's book. After a few minutes a yard goat pulled up a string of gons with scrap iron inside, along with some grainers and boxcars. I inquired and the good engineer told me that the train was headed for Albany, but that the train I was on, Track 3, was headed for Portland and was due to be called any time.

I spent the next couple of hours sipping peacefully on my remaining Budweiser pounders garnered in Carlin, as well as a (don't give me any shit for this Fred) 40oz Coors Lite and reading Duffy's pearls of wisdom.

At about 11:30 three locomotives, 2 SP units and a yard goat, pulled up on Track 2 and then switched onto the head of my train. After a ½ hour of excitement thinking I was going to get the hell out of there, my hopes were dashed upon watching the crew depart into a waiting Suburban headed for the Eugene yard depot.

Finally, an hour later, I felt the air go up yet again, and saw 2 new crew members boarding the first unit. A few minutes later, sunny sky overhead and nearly full 40oz'r in hand, I was underway and STOKED to be leaving.

After a short stop in Albany to drop off the yard goat, the trip back to Portland's Brookland Yard was rather pleasant and uneventful. As we hit the outskirts of Portland it started getting dark and rainy. We finally pulled into Brookland at about 4:30 p.m. I slogged the few blocks to the corner of 12th and Powell, caught the #70 bus to 12th and Sandy, and then caught another bus up to the Hollywood Transit Center. After that I walked the few blocks home and collapsed in a heap of exhaustion...