Man, the indian summer that the west coast has been having this past October (78 degrees in late October - in PORTLAND ?!?!?) gave me the itch to get in just one more ride before the inevitable onset of colder weather. After a pleasant day hanging out in the yard, a lively "sendoff" by North Bank Fred at Dunsmuir, and again an hour later up at Black Butte, I made good time up to Klamath Falls - 3.5 hours. Scarfed a six pack o' Bud Lite and a half-can of Kodiak before I even made it to Klamath. 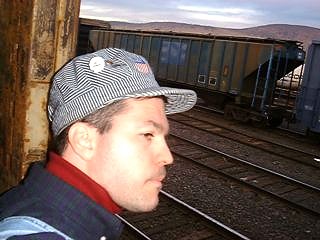 Came into Klamath yard on the main and was only there for 15 minutes, then we took off at 6:15 p.m. Headed north until about 8:30, then we pulled over into a siding. I woke up and got out at 9:30 p.m., I didn't know where we were and it was COLD - figured we were somewhere around Cascade Summit or Chemult or something.

I had a nice piece of cardboard in my boxcar, and earlier in the evening I had folded that in two and put it on a piece of plywood, then rolled up in my blanket inside of that. Was pretty toasty and slept moderately well. Got up around 8:00 a.m. the next morning and was damned to find out that we hadn't moved an inch all night.

I could see some buildings off at the south end of the siding in the distance (end of the train) but didn't want to head down there for fear of the train leaving. I decided to walk up toward a grainer that was on the train (about 20 cars up). About 10-12 cars up I saw two tramps on the other side of the train, so I crossed over and talked to them. It was Hippy, his dog Bones and Ernie. Old friends of NBF, Larry, Bird, Aussie Terry, Preacher, No Nuts, etc.

Anyway, we all chatted for about 15 minutes or so, then I headed back down to my car. Turns out they got on in Klamath. They had just talked to Roger on Thursday and they said that he told them he is planning to retire next April or May (2000). Also said they heard of a stabbing last week in No Nut's camp in Dunsmuir.

Well, I went back to sleep as the sun came up, then as things heated up around 11:00 a.m. I turned on the scanner, wondering what we were going to be doing as this fine day unfolded. I was really stumped, because the units were idling all night & morning, and the train was still aired up - my car was hissing underneath. 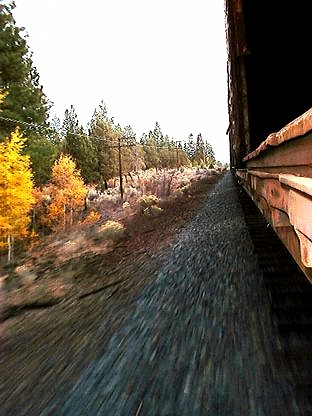 Turned on the scanner to immediately hear the UP 9544 engineer talking to the dispatcher. Something must have been wrong with the units or something - he was talking about disconnecting the units, hooking them back up to the ass end of the train, then pulling everything back to Klamath. Then he got track warrants around the switch to do just that. The dispatcher was wigged out because the Amtrak 14 (northbound Coast Starlight) was rapidly approaching Klamath, and would be heading our way VERY soon. The conductor blew him off - it was great.

From all this radio chatter (it was funny to hear dispatcher and engineer argue - engineer was getting pissed) it turns out we were at Lenz - only 54 miles north of Klamath!!! We were a good 75 miles south of Cascade Summit.

Well, armed with all this knowledge I grabbed my stuff and walked back to hang out with Hippy and let them know what was going on. It was kind of like one time last year that Fred and I communicated via cell phone and he had filled in a tramp in Dunsmuir with EXCRUCIATINGLY detailed information about rides on a train that was still a good half hour from town, I literally sent Hippy & Ernie reeling with info about what was happening.

We were sitting there talking just after I explained what was gonna happen, and I said "yeah, the conductor should probably be dumping the air right about now" - not two seconds later "pssshhhhh!!!" goes the air down. Then we started talking some more and I casually mentioned that we should hear the units going by in a minute or so (guessing) - not 45 seconds later we hear the oncoming rumble of the 5 units going by. (My scanner was off and in my bag this entire time) Those guys thought I was Jesus or psychic or something. Then I told them I heard it on the scanner.

So I hopped up in the car with them and after the units passed us and spent an hour re-hooking up and blathering with the dispatcher ("C'mon, when are you guys gonna release that track - the 14's cleared Klamath and is making tracks toward you !!") and we rode back into Klamath and beelined it straight for Gino's.

I shit you not, I think that Gino's Market (probable NASDAQ symbol: GNOS) will be having its IPO stock offering pretty soon - it must be "the" hot industry of Klamath Falls these days. I heartily recommend that you buy some stock if it does !!

We walk up and all three of us just shat our pants - Gino's had a brand-new sign, the building was painted up all nicely, and right next door was "Gino's Cafe Italiano" - fine dining a la Klamath. Also there was some sign outside on the front of the store billing the "McGino's" sandwich as the best thing since the invention of the wheel.

Since I love anything with "Mc" in the name (and knowing how excellent Gino's sandwiches are) I sprung for one of those McGino's and I wasn't disappointed. Otherwise it was same Gino's prices, same Gino's flavors.

Anyway, after walking back to the yard I parted ways with those guys (who were going to wait over by the Arby's for the next train - after deciding to pass on the two trains (the BN Rabanco container trash train [phewee!] and the beet train) that headed out north while we were hanging across the street from Gino's. 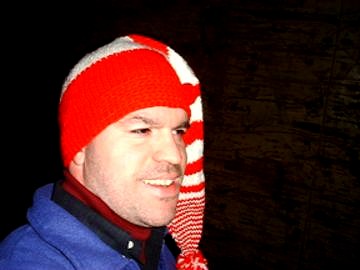 It was about 4:00 p.m., so after saying goodbyes to my "road brothers" I walked over to the Maverick Motel and got a room for the night and showered up and watched TV. Headed back over to Gino's before they closed, and also took a walk down to the ice house to check things out - no one there. Roger's stall at the UP office was empty when I walked by on the way down, but on the way back I could see him pulling in and getting out to go inside. He's driving a white unmarked Ford Explorer these days.

So I headed back to the motel, and caught a few hours sleep and a documentary on Niagara Falls on the TV, then headed over just south of the UP office to find a suitable train about 12 midnight. Found a nice boxcar and hopped inside, and man, we made great time all the way up to Portland - 9 hours! Got off at East Portland Junction (no bull at Brooklyn) and just walked up to the MAX station for a free ride home.