After my sixth hour in jail, the euphoria of freight train riding wore off. It wasn't really the claustrophobia of my cell, the public toilet, or the man who sat dejectedly in neck shackles in a pool of his own excrement (he had just tried to attack a female police officer) - all these things were unpleasant, certainly. But it was the desperate boredom that really killed me. How four tiny walls could contain such an infinite amount of misery was something I never anticipated. No, there is nothing glamorous about jail. But I can't complain - I chose to hop that train. 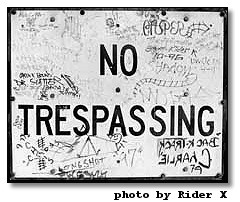 It was June 15. One of the first, really hot days, when everything is thick and tastes of salt. I'd received a tip about a seasoned trainhopper in Portland - going by the moniker Rider X - who was going to hop a train and attend a hobo "convention" in Dunsmuir, California. This is a yearly occasion where the all-star hobos and tramps collect and hobnob; if only for a few days.

One frantic half hour later, I was wandering around the freight yard, changed from a light-cotton, white dress to an old, gray sweatshirt, jeans, and grimy running shoes. (Later, when I was arrested, the police officer would record that all my clothes were in "worn" condition.)

In a moment of perfect luck, I spotted Rider X, crouched in an elbow of the freight yard, camouflaged within the shrubbery. He had no idea I was coming. Relieved and thrilled that I had actually discovered my contact, I climbed on the wheel of a car and called out to him. He looked up with surprise, and then dismay. "Take your foot off that wheel right now! Now!" he yelled (it was the loudest I would ever hear Rider X speak).

This was my first lesson in how to play the game of trainhopping. In many ways, it's just like any other sport - yet with higher stakes. There are rules, and if you're stupid about them, you'll get hurt. Maybe even killed. I later discovered that if you step on a wheel and the train begins to move, your legs could get sucked under, and possibly sliced off. 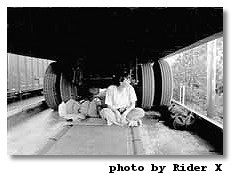 After a hasty intro, Rider X and I caught a "Piggy Back" train, meaning we rode under a semi-truck driven onto the back of a flat car. It was a dense twilight when we caught the train, and we watched the sunset with flask of whiskey while wedged between the giant wheels of the truck. The danger and excitement produced a kind of euphoria that I remember experiencing only one other time: On a trip in Wales, when I hitch-hiked alone 60 miles through yellow hills, to hike the highest mountain in the country. It's a feeling that's hard to describe, but on both occasions, I was giddy with satisfaction.

As one seasoned rider later told me, "After your first ride on the train, you realize that it is an unparalleled freedom, sitting there, in the wind." Sure, it sounds corny, but it's true. It was as if someone had taken all elements of the standard vacation and distilled them down to its most sublime form.

Rider X proved to be an endlessly patient companion and guide, especially since I was a surprise tag-a-along. He was prepared for a solo, 24-hour journey, as well as a vacation from his family and job, so when I told him a) I was a journalist, b) I'd never done this before, and c) I was going to tag along with him, he was silent. After five minutes of tension, I knew I had to either say something or jump off right there. "Are you really mad at me?" I quietly asked him as the train rolled along. Pause. "No," he said softly. "No, not at all."

I decided I might as well get it over with. "Well then, do you mind me coming with you?"

Longer pause. "No... No, I guess not." And from that point on, we developed a quiet camaraderie, getting to know each other in the time between great silences.

All through Southern Oregon and into California, we teetered on the edge of 50 foot cliffs where sharp rivers cut clean trails through blond canyons; places where no roads, and no people, exist. We rode like this through the night, stopping once for 3 hours to switch trains, then catching the back of a "grainer;" a grain car with a small porch on the back. Sleeping on the grainer wasn't exactly cozy, but in the morning - waking up as the train sat dead still and silent in the middle of an Aspen forest - compensated for any suffering.

When I first told Rider X I was writing this story, he grimaced and said, "This isn't an amusement park." He was right. As I said, riding is a game with enormous risks. In fact, a little over one year ago, police finally captured serial killer Robert Silveria, who traveled the railroads for six years, brutally murdering more than one dozen fellow hobos with whatever tools he found on hand.

The killer went by the moniker of "Sidetrack," and belonged to a group called the "F.T.R.A.," a gang of men who ride year round and follow a Nazi dogma. Rider X thinks he may have met Sidetrack once, wandering below a bridge in Portland. "He was polite enough," according to X's description. "He just said hello and went on his way." In part, it took the police so long to find Sidetrack because the railroads are an ungoverned community within America - where etiquette and luck are all one can really rely on.

After waking up in filthy contentment at 11 am, we pulled into a small town outside the California border.

We stayed in hiding for awhile, until after the crew had changed, giving the bull (railroad police) plenty of time to come by. It seemed safe. When I came out of hiding, it was a beautiful day; sharp and sunny. I stripped off the old gray sweatshirt and thought about how glad I was to be here, and how my co-workers were sitting at their boring desks in our boring office.

When we saw the white jeep slowly crawling up, we didn't see any cause for concern. "It's probably just the crew," said Rider X. (Crews generally don't care about riders.) "There's probably some technical problem, or maybe they're moving the cars around." In retrospect, I wonder why we didn't run at that second. We were only a few miles from town, from some fields, from the road. We're both small people; we could have escaped.

Slow motion: the jeep's door shut and a seemingly 11-foot-man strutted the 100 yards over to where we stood. Thinking that perhaps the bull didn't see me, I tried to hide. Naturally, this didn't fool him. "Come out, right now," the bull said, in a stern, you're-being-really-stupid tone. I was embarrassed but still tried to persuade him we would never do it again. Yeah, right. Within a few moments, we were handcuffed and thrown in the back of the bull's jeep.

I'll never know if Rider X would have been caught if I hadn't been tagging along; in 15 years of riding, he'd never been arrested. This is a grand achievement. For Rider X, being caught was a giant blemish on his previously spotless record. However, I was rejoicing. "This is going to be great for my story!" Rider X shot me a cold stare, suffering in silence.

Of course, my annoyingly enthusiastic attitude only lasted for a couple of minutes. As I sat in the back of the police jeep, wrists chafing against the cuffs, the realization I was going to jail was like a slow, cold shower.

As the officer searched me - digging her rubber-gloved hands through my pockets, examining my Visa Card, my pocket knife, asking what kind of bra I wore, counting the money I had on me ($9.55) - I could see a real person there somewhere. I could imagine myself having dinner with her. Maybe she could've been a PTA mom. But there was no addressing that person, not here. Standing there, her hands brusquely searching my person, I felt truly alone.

"Jesus," my booking officer said to me. "I've seen you. You're the kind of girl whose body I identify on the tracks - the ones who are raped and have their throats slit." Though the image of someone identifying my dead body was mildly disturbing, this was actually the most concern anyone paid me - and for some reason, I appreciated it.

And then there were the questions: How old was I, where was I born, what color are my eyes, my hair, have I been arrested before, my social security number, what was my profession, who was my employer, where did I live, etc. While I didn't want to answer the questions, I obeyed, remembering the "catch more flies with honey" theory.

Yet, when they asked what my sexual preference was, I was astounded. "What does that have to do with anything?" I asked, indignant. He answered me in an equally defensive tone, something along the lines of "it's so we can know where to house you. Do you want to be housed in the wrong cell?"

A quick glance at the cells behind him told me they were all packed, and I seriously doubted there was an "all-lesbian cell." Answering truthfully would be difficult, since I've never actually been able to quantify this question with a one-word answer. I imagined telling him, "Well, I've dated both men and women, officer, and I generally enjoyed sex with all my partners." But instead I stood there, hands behind my back, and stared at him, not knowing how to answer. "Which sex do you prefer?" he asked again, losing his patience. I finally grasped the safest answer under the circumstances, and told him I preferred males.

My cellmate, LaLoni, was thrilled to welcome me into her tiny room, mostly because she hadn't talked to anyone for 10 days. She was in for 60 days on a D.U.I. with a .58 blood alcohol level, which is legally dead. Detox was, as she explained it, "pure hell. Worse than coming down from any, any drug." We barely had enough space to lay our quarter-inch thick, single person mats on the concrete floor. In one corner, there was a steel toilet, and when we used it we gave each other the courtesy of closing our eyes.

Laloni had six kids at home, the oldest one my age (22), and she took it upon herself to step into a maternal role with me ("You're a tiny little thing! Do you eat when you're on the rails?"). Before Laloni was arrested she drank, on average, a gallon of whiskey a day. Instead of the six month rehab program that the judge offered her, she chose 60 days in jail. "Of course I'm going to sober up when I get out of jail," she told me. "I'm just not going to do it in a fucking rehab center." Even when Laloni's family appeared in court and begged her to go to rehab, Laloni knew it was really because they were "all against her."

She gave me a lot of advice about surviving in jail, but the most helpful tidbit was that "the first day is the worst." Since I only stayed one day, I can only hope that's true; I couldn't have been more ecstatic when I was finally released. We were placed on six-month probation, and warned that if caught trespassing again, we would receive something just short of execution. We bought a ticket for Amtrak the remaining way, and arrived in Dunsmuir, Calif. in two hours.