part 6
Nabbed in the Rio Grande

We became illegals in Mexico almost as we hit grit in Chihuahua because of a week-old Mexico Immigration foul-up that issued us 7-day permits for a 14-day stay. Diesel shrugged at that Cinderella hour, "Head for the border!" So we beat a way north to Ojinaga, Mexico on the bank of the Rio Grande. 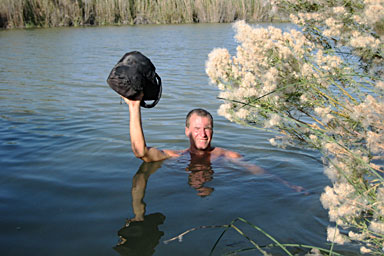 Atop the only hill in the pueblo at dawn, we beheld the Rio Grande valley and its infamous liquid border with Presido, Texas on the far side. I lingered at the vista. Look, partner, instructed Diesel. I know you're a careful fellow. But it doesn t matter if we get caught on the Mexican side because we ll bribe out; and it doesn't matter if we're captured on the American side since we'll say we're day hikers. The great improbability is to get nabbed exactly in the middle of the river, so relax.

We descended dirt steps dug into the hill and melted into the tall sawgrass on the valley floor. It was simple to trace the illegals winding trail of fast food wrappers and water jugs. We remembered to pick up a Doritos Chips wrapper and jug to later ferry the Rio.

Diesel halted before six snarling mongrels. "This is the end!" he backpedaled. I stepped up. "These are Mexican dogs. Watch!" I feigned picking up a stone and the pack scattered. Shortly, the way was blocked by a fence so we took turns parting the barbwire. On the other side, Diesel straightened at seeing a half-dozen foraging cattle. "Those cows have horns!" And he backed into the fence. I followed the startled cows through scrub along their easiest path for the river, and he trailed. Later Diesel, alert for rattlers, vigilantes and burrs, marched into a Live Oak copse with a dozen beehives for fertilization. I hummed a warning in time and we swung around the hives.

The pueblo was thirty minutes behind when the region dipped to a brush-skirted river that we presumed was the Rio Grande. We hawed on the bank of the 5-mph current of unknown depth and 25-yards width. "You're a fine swimmer", I urged. He stripped to shorts, tiptoed to the edge, and probed it with a five-foot stick that disappeared from sight. The worst drummer I ever heard beat a tattoo starting a pueblo parade far behind us. Diesel muttered, "I'm going to sit on the bank to acclimate".

"Are there snakes in there?" he soon grimaced. "No", I replied. "Are there crocodiles or anything else I should know about?" I soothed, "There's only your fear of the unknown". He slipped into the dark water. He then kicked expertly to the middle, returned and hollered up, "Hand me the load!"

The Fox, Chicken and Grain dilemma faced in crossing the river was that we had cameras, penlights, money belts and passports that couldn't get wet. Yet we had scavenged only a Doritos Chips bag and one-gallon jug to float it all. "How did the farmer solve the riddle?" I questioned. "He took the fox, chicken and grain across in the correct combinations and sequence so nothing got eaten", Diesel responded. His accountant mind clicked. Likewise, we ferry a few valuables while you watch the ones left on shore that they aren't stolen.

I loaded the jug with half the stash and handed it down the edge. After a five minute labored crossing using one arm and legs, and back, he flopped before me gulping like a banked fish. "You swim the next load!" Surely he joked. But pride prevailed. I exhausted at mid-river and swallowed water clear to the far side. The return to Diesel with the empty canoe was easier and, following a breather, we swam the Rio together.

Welcome to the USA! we gasped to each other at land's touch. The sun dried our clothes quickly as we hiked on. I insisted on walking backwards over soft dirt to throw off the Border Patrol. "I tell you", he griped, "There's no provable misdeed if we're caught". But he clumsily followed my lead. Later, we brushed our tracks out with branches. Then we encountered a narrow canal that he assured could be taken with a leap, and did majestically, as I waded. Soon we were thrown bolt upright at a Spanish sign Rancho Pobre in the corner of a pasture of scrawny, staring cows. My ally moaned, We're still in Mexico!

The reasonable course was a compass bearing north over cow puckies and around creosote bushes. We halted before sunset at a wide stream bubbling over rocks. "THIS is the Rio Grande!" he exclaimed. "I'll go first", and I entered the shallow water in boots. At midstream, a US Border Patrol wagon pulled alongside the far shore.

I was nabbed in the Rio Grande with one foot in Mexico and the other in the USA!

I waved at mid-river in false glee and hollered to a jolly giant Patrolman, "I have no weapons!" He inquired, "Citizen of the US?" The officer questioned me on shore while awaiting a report from the paddy wagon computer on my California license. Where did we start hiking? On the USA side. What time? Three hours ago. Did I know this was the Rio Grande River? No! My voice cracked; it is hard to lie to an honest man. Abruptly, a hunter in camouflage with a red vest materialized from the riverweeds and the riddle of our capture was answered. He grinned and introduced himself as an off-duty patrolman hunting doves. Likely he spotted us birds and radioed the giant.

Meanwhile, Diesel posed on the Mexican side of the river with glasses balanced on nose tip gazing at the sky. The big officer finally waved him over. By slyly freezing, Diesel had committed no crime. Now he was summoned to illegally enter the USA by the Border Patrol. We watched him from thirty yards bend slowly to remove shoes and socks, then toe the water. "He's a city boy", I advised the officers. They grunted. I added, "Probably never waded a stream before".

He held up his shorts like a sissy to reveal a bold tan stripe while blinking upstream. "Doesn't want to wet his pants, I tendered", and the two men guffawed. He faltered on the rocks barefoot in knee-deep water. "The slicker needs help!" I yelped and waded in. I grasped his pack and murmured, "We began hiking in the USA three hours ago and got lost". He showed his teeth.