With trembling fingers I brushed the frost off my thermometer and saw it read 0 degrees - fortunately I was just checking out the freezer on a new refrigerator, but the nights that lay ahead for me on an upcoming train trip out the Modoc line wouldn't be much warmer. 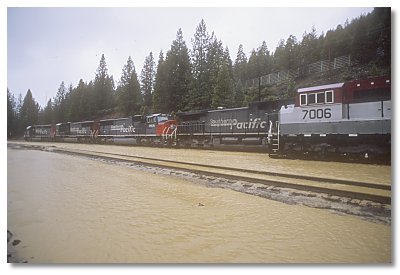 Since flood damage from a major New Year's storm had closed my "local" railroad, the UP between Roseville and Klamath Falls, I planned to drive up to Klamath and catch some of the detour traffic headed out to Wendel on the Modoc line, which normally sees only one train a day each way. Those aren't "mud puddles" in the photo of the south end of the Dunsmuir yard - that's the river! Kari, Steve and Dan were to meet me in Klamath after taking a train down from Portland. Since my riding partners were going to catch out of the Brooklyn yard on Tues. night, I drove up to Klamath on Wed. morning to meet them "somewhere around the yard". I gave them my cell phone number so we could get in touch wherever we happened to end up.

After hanging around the town/yard most of the day with no southbounds coming in, I decided to drive a few miles north of town, park next to the lake and the mainline and watch the sunset while enjoying my favorite "beverage". After a few hours and the sun as set as it was gonna get, I saw a northbound come out of the yard and go into a siding next to me, indicating that there was a southbound coming soon. Assured that it would be the train my friends were on, I prepared to follow it to the yard to meet them. Unfortunately it was just 4 units coming back light - helpers, I thought. Then I figured that there wouldn't be any need for helpers on this side of the Cascades, so they must have tied down the train and brought the power back to Klamath. I drove up to the next siding, expecting to see a train sitting there with my compatriots aboard, but no luck. Thinking it rather futile to drive the entire mainline back to Eugene looking for a stranded train in the dark, I drove back to Klamath and got a motel room.

The Maverick Motel was just what I was looking for: cheap ($29), close to the yard (2 blocks), warm room (I had to open the windows to cool it off when I got there), uncrowded and a shower to die for. After a bottle or so and a scalding shower, I had just dozed off when, at 8:30 pm, my cell phone rang and it was Kari and her friends, stranded at a truck stop about 5 miles north of town. They had gotten parked, but on the next siding north of the one I scoped out. Leaping out of bed, I drove like the wind to pick them up, but when we got back to town we found out that the last eastbound train had left a half hour ago and there wouldn't be any more until late the next afternoon because they were "fleeting" the trains - allowing several trains to leave in one direction, then several more in the other direction. Since our "direction" wasn't going anywhere until the next day we consigned ourselves to the motel room and looked forward to all the sights and sounds that only a World-class city like Klamath Falls could offer us.

The next morning we took full advantage of our 12:00 noon check out time, then hit Safeway for grub and Dickie's Mini-Superette for vino. The plan was to drive everyone down to the overpass near the wye for the Modoc line, leave humans and gear in a big pile then I would drive back to the venerable Maverick Motel where I had arranged to leave my truck in their lot for a few days and walk (ugh) back to the bridge. As I was walking back to join the rest under the bridge a southbound train came through the yard headed for the bridge and (hopefully) the Modoc, but unfortunately it was on the opposite side of the yard from where I was. Not wanting to miss what seemed to be the first train out of the yard in almost 24 hours, I started clambering over an endless sea of railcars in order to reach the far track and bag a ride on the train to save me a long walk to the bridge. As luck would have it, just as I reached the mainline and started to look for a ladder to grab the train stopped. This event was met with enthusiasm because, after hurdling over several strings of cars in the yard to get to the mainline, I could now leisurely walk the train looking for rides. Slim pickin's on this one, however - the only car that would have room to "sleep" 4 people was a flat car loaded with lumber, and with it getting down into the 'teens at night this didn't look like the greatest ride. I was saved from having to make any sort of decision about the chances of surviving the trip to Wendel on an outside ride when the train went into the Texum siding, rather than out the wye, and was tied down - with 4 southbounds already in the yard there was no room for this one.

With the sun setting and the cold setting in, Steve opted to go back up to Eugene and Portland because he was suffering from a bad cold, which could only get worse where we were going. After walking back up to the far end of the main yard, he was "discovered" by Roger but managed to bag a northbound at 12:30 am and, after a 10 hour wait in Eugene, got into Portland late Fri. night. The rest of us, feeling somewhat emboldened by the cover of darkness, trudged back to the yard and, after walking back and forth along every southbound looking for rides, found an empty wooden-floored boxcar and crawled in and went to sleep.

At 6:00 am the next morning we finally left the yard towards Wendel, after spending about 34 hours waiting for a train. The weather wasn't too bad - high overcast with periods of sun now and then. Since our train was going in the "loaded" direction the ride was very smooth and quiet, since the walls were covered in plywood and for once the doors didn't rattle. After about 4 or 5 hours we stopped in Alturas for an hour while the crew went for beans. At the other end of the long valley that Alturas sits in we picked up a 3-unit helper set for the short but curvy climb out. Dropping them off at the summit, we enjoyed a nice ride down to the desert level at Wendel, getting in just after the sun set. 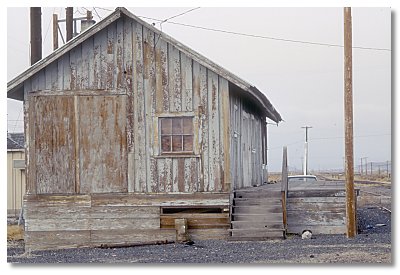 Parking ourselves on the loading dock next to what passes for the freight office, we observed that there were already 3 northbounds waiting in the "yard" to go back to Klamath. Not knowing which string would leave first, I looked forward to the arrival of anyone at the freight office, which was unlocked but empty. Shortly a large, official looking man drove up and, putting on my best front, I cheerfully posed the question "'Evening... do you know when they'll start kicking out these trains for Klamath?". Stopping in his tracks, a puzzled expression on his face, he shot back "Who wants to know?". I sensed immediately that this was gonna be a tough nut to crack, so I came up with the line that we weren't having any luck hitchhiking so we thought we'd take a train to Klamath instead. That brought out the helpful suggestion from him that "Not by train you're not - it's against company policy", spoken with the satisfied tone of a man who's proud to work for a company that has "policies", no matter what they were. As a parting remark, just as he was about to duck into the office he added "Don't let me see you gettin' on any of those northbound trains". I had now just written this guy off as being "overly friendly to tramps" when he opened the door and hollered "...it'll be around midnight".

With this confusing information fluttering around in our heads, we made a circuitous trip back to the yard and in the freezing darkness found another empty, where, with a minimum of flashlight activity we set up "camp" and went to sleep. This was starting to get familiar - at 6:00 am the next morning we left town, headed back to Klamath under clear skies but, since we were now on a mostly empty train the majority of the ride was made uncomfortable by harmonic rocking. Once we got our "sea legs" it wasn't too bad, but a long stretch near Alturas was several hours of freezing fog, frozen ponds and frost-covered sagebrush. We broke out of the fog as we got closer to Klamath, but had to wait to get block authority about 20 miles before we got to the yard. After spending an hour and a half sitting on the mainline we heard the dispatcher tell a train to "Tie 'er down... light engines to Klamath". Not knowing if he was talking to our train or not I prepared for the worse, but, to everyone's unbridled surprise, we started up for Klamath immediately, getting in around 3:30 pm.

I bailed off midway through the yard to walk back to my truck with Kari and Dan holding down our car in hopes that he'd just change crews and head for Eugene. After switching out one of the units, within a few hours they were on their way north again. Once in Eugene they had to bail off and hustle back to another string where the Portland cars were being set out to, but in another hour or so the crew arrived and they were off to Portland on a pig. Coming into Brooklyn too fast to bail off before they got to where the bull was spotlighting the train, they rode through his headlights but managed to "de-train" and get away without getting caught.

The next time I do this ride it's gonna be in the summer - besides being cold all the time in the winter there just isn't enough daylight to enjoy the entire line - we left in the dark and got back in the dark. Oh well, at least there aren't any large metropolitan areas to go through, and if you like sagebrush and junipers you've got it made. The trains (both ways) slowed down to a walk when they went around the corner at Alturas, so that could possibly be a jumping off/on location. Along the stretch of valley south of there we saw antelope, deer, blue herons, Canada geese and a bald eagle. Probably the only drawback (aside from the 11½ hour ride out) was the lack of "facilities" in Wendel - too bad they closed the lunchroom...