Last summer me and my girlfriend had made our way to Canada. Well, when we had our fill of Montreal we decided to head west. Neither of us had rode the Canadian lowline, so we thought it would be a great idea. In about the second week in August we got around to leaving Montreal. We sat at the park right outside the Port of Montreal yard watching the trains build and waiting for the rest of our crew. When everyone showed up we decided it was time to go get on our train, since we had been watching them build we knew that a train was gonna be leaving soon. There was a train full of Army stuff (tanks, trucks, and lots of stuff that was tarp covered) and then there was a nice IM train. We had our choice of pigs or 48s - everything on there was rideable, I think. Me and my girlfriend got on the front of a 48 and T.J. and Dee got on the back of the 48 in front of us, so we were facing each other. We chose a good time to get on because within 5 minutes of us hopping on, the train aired up.

We then pulled outta the yard and headed toward the HUGE Montreal yard. We rode right past where our old camp was which we got kicked outta by good ol' CP police. Then about 10 miles outside of town we stopped for a good 15 minutes at which time I headed back a couple of cars to check out something, but before I could get back to where I was headed I heard us air up so I ran back up to the car where we were and got back on, then we were off. About 30 minutes later we pulled into Montreal's HUGE yard and stopped. We had pulled up right next to the Army train that was back in the other yard. By this time it was dark out so we weren't worried about the cameras in the yard as long as we stayed down. 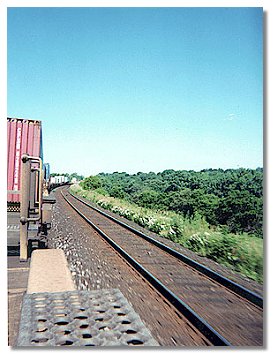 We sat in the yard for about a hour, during this time the bull drove up and down past our train many times, but he was only concerned with the Army train - shining his lights only on that train. We finally pulled outta the yard with no problem. By this time we were all pretty tired so we all went to sleep for the night. When we woke up we were out in the middle of nowhere (see picture at left). What was odd is that we were only going 5 to 10 mph. We couldn't figure this out, but it went on for maybe 3 to 4 hours. Then about noon we pulled to Sudbury for the crew change. Where we stopped in the yard we could smell some really good BBQ close by. One of us peeked out the car and saw a backyard party at the house right in front of us only about 100 ft away. That BBQ really smelled good considering all we been eating was Ramen noodles since we left Montreal. We stayed on the train and sure enough as long as it took the crew to get off the train and the new crew to get on we were leaving the yard.

So we thought. We pulled about 4 miles out of the yard and stopped. We couldn't figure out what we were doing, other then waiting for another train to pass, but this never happened. We sat there from about 12:30 pm till about 6 or 7 pm. In this time only 2 or 3 trains passed us so we were confused, but I guess it was good in a way - the dogs got to get off and run around and do their stuff. When we began to move the sun was starting to go down. We stayed up for awhile looking at scenery and talking about a bunch of nothing (things you do when you're on a train). We went to bed that night and froze because we got rained on a little, but not enough to make us soaked just enough to make the wind cold. When we woke up we were in North Bay, Canada in the yard. We decided to get of here to get more water and food (and have some beers) so we got out and talked to a yardworker who gave us directions to town and told us to be careful riding trains. Little did we know that town was just around the corner but we couldn't see it due to trees.

We went to town and got food and water and then to the beer store (LCBO). We sat in this park-type area next to the train yard drinking and watching trains. Once the drinks were gone it had gotten kinda late and we walked back toward where we got off the train since there was a little wooded area there. We were off train property but close enough to get on one if it came. We all decided it was best just to get out out bedrolls and sleep there for the night. In the morning we were awakened by the sound of yard workers in the distance. They were doing track repair right in front of us. We played paper-rock-scissors to see who was gonna go talk to them. We found out that not alot of trains stop here for long so if we were gonna get one it was gonna have to be quick. Anyway, about 2 hours of waiting paid off - a doublestack train pulled up and stopped. What was odd about this is that there was only 1 rideable car on the whole train, so we took it. We started to pull outta the yard and stopped right in front of the yard office. At this time we heard voices. Later we found out that it was 2 other people getting on the front of our car. A few minutes later we were outta North Bay.

This is a great ride and the scenery is really nice. Although we did see a dead moose on the side of the tracks that had been hit by a train - that wasn't so nice. We pulled into White River and did the crew change and were outta there in a second. About an hour or so later we pulled through a work area where someone saw us on the train from their trailer. The train got stopped and we got pulled off. It was just a worker though. He said he doesn't care if we ride, but he has to do his job and since someone saw us he had to pull us off. But that would turn out to be a good thing in the long run. We split into groups of 2 and hitchhiked into the next town, which happened to be Marathon. This was a good place to us. We made almost 100 dollars in the first 20 minutes of being there. We found out where the tracks were and how often trains run through. The good thing was trains do run through - the bad thing is that they don't stop. Well we thought we might get lucky so we went and found a camping spot. It wasn't the greatest spot - it was out in the open and on a hiking trail, but we never once got bothered by anyone. After about a week of watching trains go by and not stop we got pissed so we tried hitchhiking to the next city, but if anyone has ever been to Marathon they will know what I'm talking about when I say you can not hitchhike at all there - it is impossible. So after being there for about 8 days we did something we weren't sure would work, but we went to the police station and asked them to buy us bus tickets outta there. They did it because they wanted us outta there bad I guess. So we got our bus ticket and went to the stop. 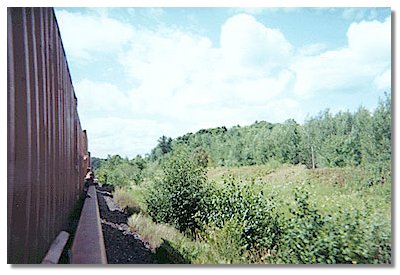 We found out that we had about 2 hours before the bus came in so we went and had one last beer in Marathon down by the tracks (since everyone knows riding a bus sober is not fun). Well guess what - right as we open our beers a fuckin' junk train headed our way stopped right in front of us. We couldn't believe it, but fuck the bus. We were on that train in no time. It's like it stopped just for us cause as soon as we were on it it took off. We rode an empty gondola-type car, but what is weird about this car is that the sides would drop down if you unlatched them. I've never ridden one of these, but I sure was glad to be back on a train and not a bus. Well it turned out to the nicest ride I have ever ridden - you wind your way along Lake Superior, and when I say along it, I mean along it - you are right on the coast. It's so nice - lots of little tunnels. Well we pulled into Schreiber, the next crew change, and our train broke up there. We saw a stack train leaving and went for it, but we were too slow. We talked to some yard workers and they said the next train was out around midnight. It was only about 5 pm or so. We went into town and tried to get something to eat. We were gonna go back and get the train but we decided not to, so we sleep out behind this little restaurant that fed us that night. When we woke up there was the bus to Thunder Bay. Since we had our tickets still we got on it. It was a short ride so it didn't matter too much since it was about 6 am. Well we got to Thunder Bay and met up with some friends who didn't get pulled off the train back in Marathon (see picture above).