Winnipeg, MB - Who has not felt the urge to cast off responsibility and strike out for parts unknown? Without exception, everyone has sat at their office desk fuming over something the boss has done, or not done - or something in your life you can't do much about anyway. There is a breed of people who have done it - they said '... take this job and shove it - I aint' workin' here no more!' It is a lifestyle many of them have embraced as routine and are actually quite comfortable... well, most of the time anyway...

They used to call them hoboes. They still do in the United States - or tramps, but in Canada we call them train-hoppers mostly. Some may ask, 'what good are they? They don't contribute to society, they're just dirty bums!' Well, I beg to differ... theirs is a priceless gift to us - a rich legacy; a national treasure even, and in the future - an historic picture of songs, adventures, tall tales, and ballads... It is actually us who owe them a lot. Personally, I have gained intangible treasure from them - the good influence they've been on me - Courage in hardships; loyalty to friends; resourcefulness; bravery; honesty; individuality; humility; optimism; tolerance; generosity...

Over the years I have met hundreds of youngsters and telling their story is often quite depressing, both for them, and for me too. But those are the youngsters barely in their teens and most are runaways. Studies have concurred that most are there because of extreme abuse of one sort or other at home. But this article is about those who are now still not so old - but sort of 'old hands' at being on the road with empty pockets. The kids I talked to in Winnipeg were mostly in their mid-to late twenties with thousands of miles of train hopping under their belts. Sadly, some of them, of course had tales of a bad childhood that traced its way to the road. But whatever their pasts - they were a great bunch: humorous, witty, and, maybe a bit filthy - but charming nonetheless.

They are not really bums 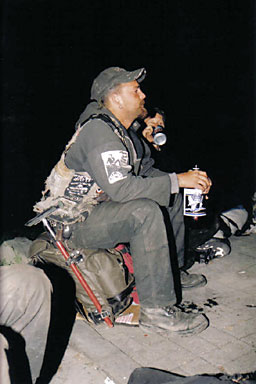 Like the charming hobo of old, some of the new train hoppers carry their tools with them. But for these young tramps in Canada, their tool of choice is not a hoe like the hoboes carried - but a squeegee. What I have noticed over the years is how incredibly similar they are to the hobo of tradition.

Although there are differing opinions about how many hoboes there currently are - they definitely have kept in touch. In fact, each year there is a convention in Britt, Iowa where a "king" and "queen" of the hoboes is named. The hundredth anniversary of the gathering will be in 2006.

Sarah George, a filmmaker from England, who made a documentary called "Hobo Jungles", said she had heard estimates of 10,000 to 100,000 regular freight hoppers in North America. But Gerri Hall, president of Operation Lifesaver, a rail safety group, says it is closer to 20,000 who ride the rails occasionally. The largest group, according to Hall are true tramps (mostly men from 30 to 50 years old). Followed by "punks". Youths according to Hall who are rebelling against society. I would add to that, however, some of these are probably youths who are running from abuse at home too... then there are "recreational hoppers", middle class people doing it for a thrill.

There's an old favourite hobo tune called The Big Rock Candy Mountain by Harry "Haywire Mac" McClintock, circa 1920, that goes like this:

On a summer day in the month of May a burly hobo came hiking
Down a shady lane through the sugar cane, he was looking for his liking.
As he roamed along he sang a song of the land of milk and honey
Where a man can stay for many a day, and he won't need any money

Oh the buzzin' of the bees in the cigarette trees near the soda water fountain,
At the lemonade springs where the bluebird sings on the Big Rock Candy Mountain

There's a lake of gin we can both jump in, and the handouts grow on bushes
In the new-mown hay we can sleep all day, and the bars all have free lunches
Where the mail train stops and there ain't no cops, and the folks are tender-hearted

The hobo of history

In the mid-19th century, civil war veterans who were in need of work after the civil war had destroyed much of America's economy hopped freight trains. They were probably the first train hoppers. They travelled from farm to farm to work for whatever was offered. They often carried hoes with them. They called them 'hoe-boys'. Many historians agree that the term 'hobo' derived from the phrase 'hoe boy'. When you see cartoons of hoboes with a stick on their shoulder and a knapsack they were actually carrying a hoe with a knapsack tied on the end of it. Young men worked in gardens for a few days room and board - the work they did was arguably not very necessary work, but an agreement whereby the hobo was given a full belly and maybe a pillow for a night. They would also do odd jobs like washing floors in a hotel, for example for a nights stay and a hot bath.

Black Tuesday, October 29, 1929, was the start of the Great Depression. This was the golden age of the hobo. During the depression it is believed that nearly one and a half million hoboes from many walks of life road the rails. They had a culture and code all their own. They weren't bums; bums begged and hoboes did work often for just a meal. According to Jeff Davis, King of the Hoboes, 1913: 'A hobo is a man who will work when he can get it, at a decent wage, but insists upon the right to beat his way from town to town to better his condition - Men of character'.

The now famous Canadian "Trekkers" hopped east from Vancouver, BC toward Ottawa in the depression to demand more decent conditions for the poor. They were stopped and beaten by the R.C.M.P. in Regina, Saskatchewan while on their way to Ottawa. 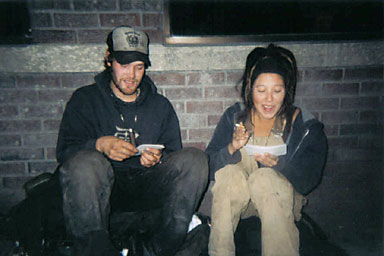 The use of the word "punks" is not derogatory; by the way, the "punk movement" is seen as something quite noble. I ran into Dustin and Mackie at Polo Park in Winnipeg. They had been trying to pan in front of the mall, without much success. Because of their extremely dirty fingernails and condition of their clothes I knew they were train hoppers.

"We didn't have much luck here, " said 24-year-old Dustin, "We're trying to make enough to catch out to Edmonton. 26-year-old Mackie has been travelling for 6 years, Dustin for an incredible 12 years (and hopping for 8). They met first in Vancouver, BC one year ago then again in Calgary just three months ago. They then train hopped to Toronto from Alberta. When I met them they had just arrived from Toronto and were heading west again to Edmonton, Alberta. I gave them my phone number and left knowing they probably wouldn't call. Fortunately, however, I ran into them in Osborne Village later that day - and they introduced me to more squeegee punks and train hoppers than I had ever seen together in one place. 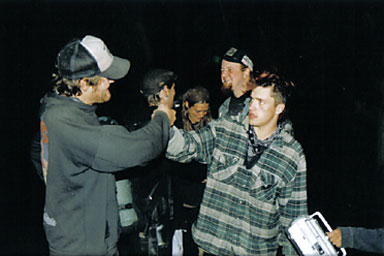 It was raining that day so they had taken shelter under a bridge. The beer was flowing freely and there was carnival atmosphere there. It was like a family reunion, as young men and women who had not seen each other in months or years even, shared adventure stories. Woody Guthrie could be heard wailing away from someone's ghetto blaster. Later on, as everyone got more sauced, a few of the boys began singing 'King of the Road'. None of them knew all the words to it though. Not much opportunity to interview there, but it was entertaining non-the-less. The reason so many had ended up in one spot is because a lot of transient youth and squeegee kids head west for the winter, where it is warmer. On my way home I looked up and saw about a dozen geese flying over Winnipeg - heading south. I had to chuckle... just like the train hoppers, I thought.

I sat on Osborne St. in Winnipeg talking to Dustin and Mackie the next day. Dustin or Mackie would every so often say, 'excuse me,' and ask a passer-by if they could have their leftovers. People were coming out of the many restaurants with little leftover bags. Dustin and Mackie were ready for dinner, and showed me the ingenious way they obtained it...

Personally, I never would have noticed the bags - but these two were a seasoned pair and they had hawk eyes. In fact Mackie and Dustin had themselves a quite a good dinner - mostly yummy Chinese food. While at the same time generously offering me all kinds of info about their very interesting lives.

I showed them the pictures I had taken of the big group under the bridge the previous rainy night. "Can I keep this one?" Dustin asked. I told him to keep them all since I made two sets of them.

"The rest of them will get a kick out of them when we meet up again," he said, grinning. Then they showed me some pictures they had taken on trains. There was a picture of an old man standing on the street in one of them.

"He is a man who had seen us sitting on the sidewalk in Melville Saskatchewan earlier this summer. It was on our way to Toronto," Mackie answered. "It was funny... what he had said was, 'what are you two... some kind of new age hoboes?' He was interested because he had known hoboes decades ago. He invited us home and he had insisted we eat all the hot dogs we could because he owned a hot dog concession in town," She looked downwards at the picture again. "He's dying," she whispered... her eyes fixed on his picture, "He won't live much longer."

"Yeah," Dustin said, "we have to stop off and see him on our way through."

The words of the song, Big Rock Candy Mountain, rolled in my mind...

One evening as the sun went down and the jungle fires were burning,
Down the track came a hobo hiking, and he said, 'Boys, I'm not turning.
I'm heading for a land that's far away beside the crystal fountain;
So come with me, we'll go and see... the Big Rock Candy Mountain.'