Edmonton, Alberta - In the movie The Breakfast Club the principal tells a group of kids in detention to write out an essay explaining who they each think they are. I wonder what the mean spirited bureaucrat expected.

In the end, one of the students writes this, "Dear Mr Vernon: You see us as you want to see us - in the simplest terms, in the most convenient definitions..."

Ten years ago I set out to interview young train hoppers in Winnipeg, Manitoba. I had been writing about homeless people for street papers for years because I was homeless several times as a child, and also as a youth myself.

My first article was called The Wanderers. Then I wrote In Search of the Wanderers, about Mackie and Dustin mostly. Between the writing of these I did a lot of train hopping myself and wrote many articles about it which can be seen at www.northbankfred.com and other sites.

Although I kept in touch with many more people - there were about a dozen I met that summer, actually I should say that week - when I got the material for the article, The Wanderers - Perhaps I should say 'dirty dozen.

Ten years after meeting these citizens I would like to present to the public, in their own words, what these formerly homeless youth have to say today. 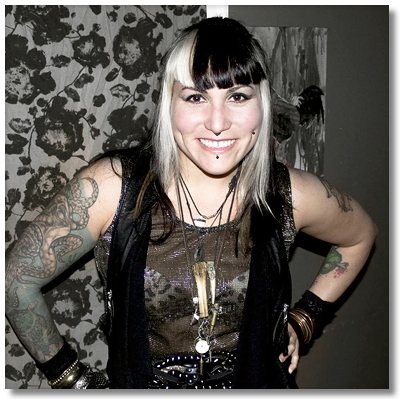 Rosa Venenosa: I met Rosa on the street the same summer as I met the others in 2004. Rosa is an amazing person. She's been involved in the punk scene for a long time. She's an artist, a go getter, and a sometimes aunty for homeless waifs on the streets of Toronto, Ontario. Although her answers are very short she contributes to the good of the GTA in many ways, and she is well known, loved, and respected. Rosa runs workshops at different drop-ins across the city - teaching kids about print making for social change. Rosa has train hopped just about everywhere in Canada - and the U.S. She's one of the most travelled train hoppers I've met.

What did you learn while traveling?

I learn new different ways of living and surviving, how to be resourceful and a quick problem solver; I learned true friendships and lived in the fast lane.

What kind of abuse did you experience on the street from cops and the public?

I experienced lots of abuse - For example cops taken my belongings; I had to walk on the hot highway with my dog after being kicked out of a hitchhiking spot; cops pulled me off a train at gunpoint; Cops have broken my elbow for asking a question; I have been offered shady jobs by random strangers; Given dirty looks and yelled horrible things at but me nothing too serious like I heard have happened to other folks.

If you could do it - What would you do to help homeless youth today - what is needed?

A better community and a better forum for information to be shared, we need people in our own community to stop alienating young folks and instead to teach them what's up.

If you could speak to the entire world and tell them about the homeless on the street and about people like yourself - what would you tell them?

To try to not hate something they don't know anything about and to instead recognize the humanity in the people that are going through homelessness.

To keep running my small screen printing shop www.facebook.com/trashassaultprintshop , and to keep teaching screen printing to at risk and homeless youth at Sketch, keep on learning and traveling and to help out as many youth that go by Toronto as much as I can." ~ Rosa. 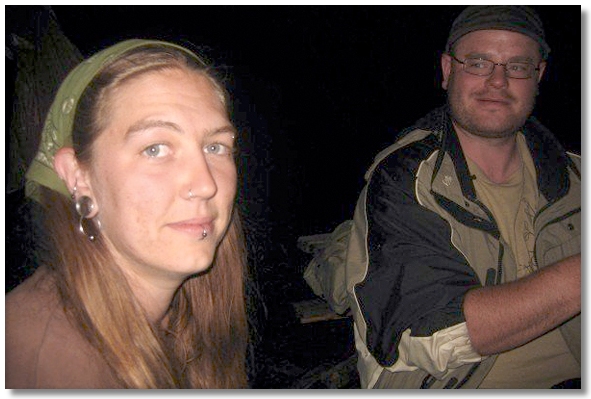 "Glad to hear you're doing well! Beerdo and I are still together, it's been 11 years now. We're doing really well. No kids and 2 Dogs. We own our own companies now doing drywall (he puts the board on and I tape). We are hoping to buy some land in BC within the next year and get away from the city life. We own a house now, and both have our own small drywall companies.

Abuse by the public - I was spit on, yelled at, laughed at and beat up. By Cops - I was kicked awake, pushed around, and verbally abused.

The Homeless youth need people to talk to. Not when you want to talk, but when they do. They need to feel like someone cares for them, and food in their bellies. The best example of what the homeless youth need? - I would say people like Dorothy who runs the Arc in Halifax.

I would tell the world that we're not garbage. Maybe try sitting down and talking to kids like humans and you would change your views. Stop being so close minded. And yes we feed our dogs!

My hopes for the future are to buy acreage and get away from society. I have now spent a lot of time living on both sides of the line, and I think the human race is ugly. No matter what you do, if you're homeless your useless garbage, if you own a home and a business your greedy scumbag, and if you're right in the middle class your lazy and will never amount to anything.

We have broken everyone of those stereotypes. We just want to make a life for ourselves away from the judgement of society." ~ Sarah.

Mackie and Dustin: I've saved Mackie and Dustin for last because they are kind of special to me. They actually inspired me to write the first of my articles on train hopping, and about the people who do it. After I met them I was very interested in their lives - and the culture of the modern day hobo. Mackie and Dustin had two kids together. The girl is 10, and the boy is 8 years old this year - July, 2015. Unfortunately Dustin and Mackie are not together and broke up not very long ago. That's life. It happens - But I'm very happy to say - they are both doing well in their lives today! 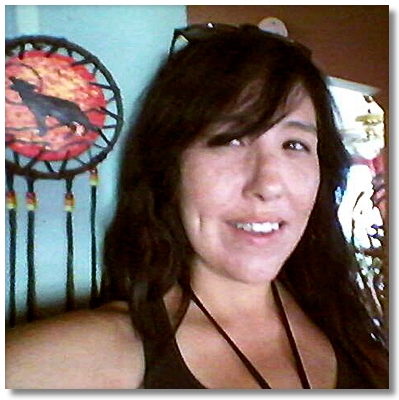 Mackie is Mi'kmaq (Micmac) Indian, who are natives from Newfoundland and Labrador. She is from a small town in New Brunswick. Dustin is from a small town in B.C. They met first on the street in Calgary, then parted ways, and met a couple of times again while train hopping. The last time they happened to meet they stayed together. Mackie hopped freight trains for 11 years. She was homeless for much of that time. Dustin also hopped freights for several years.

"Hi Rodney! I just completed my first year at UBC. I'm going back to the fitness company to be a personal fitness trainer again.

I learned that for the most part as a homeless person you are almost invisible to the public but a target to the police. The people who usually help had hardship in their lives at some point too.

If I could, I would buy an abandoned building and house homeless people, and helping with resources to get a job and be self sufficient rather than rely on soup kitchens.

If I could tell the world anything about homeless people, I would tell them that hardship can happen to anyone from any walk of life. Not everyone is an addict or came from a bad home.

My personal plans for the future are to finish university and major in indigenous studies. I want to advocate for rural indigenous communities with substandard living conditions."

These are citizens who know who they are. Ten years ago they were living their lives honestly, on the edge, trying to survive. These lives have been formed in the furnace of affliction.

They have vibrant, colorful characters and personalities. Would that all of us had that! They've obtained things that money cannot buy - Valuable things. People who have suffered the meanness of Canada's streets have more character than most of us have - Ironically, the poor citizens have more than the well off - Much more.

Like the detention kid in the movie said: "Dear Mr. Vernon, we accept the fact that we had to sacrifice a whole Saturday in detention for whatever it was we did wrong. But we think you're crazy to make us write an essay telling you who we think we are. You see us as you want to see us - in the simplest terms, in the most convenient definitions."

If we were to do otherwise - and be honest - we would have to admit we are living in an unjust society. We'd have to admit that no real effort is being made to relieve the suffering of the homeless - no real attempt at any solution - to treat them with respect and give them resources that at least alleviate traumatic conditions on the street even.

Instead, more laws are being enacted to oppress and repress them. In its lost state today, society is not ready to do what is right. Instead there are phony, misleading programs that spring up annually to give good PR to the chambers of commerce in every city. Token gestures that profit poverty pimps are numerous of course...

Then, behind closed doors, these same people with power and influence lobby hard for inhumane laws against the poor. The chambers of commerce run our society. People believe what they want to believe - whether true or not.

Recent events in the past ten years have shown a glimpse of possibilities, however - Hope - I'm talking about the re-emergence of the activist communities. Time will tell.