After corresponding for over a year by e-mail, I was finally going to meet my two German friends and introduce them to the fine art of hopping freights. Bernd (whose road name became "wuschel" because of his ruffled, disheveled appearance) and Herbert (who was dubbed "mops" because of his resemblance to a small, chubby dog) were to arrive in Dunsmuir on Amtrak #14, the northbound Coast Starlight. This was all well and good, but it meant a 3:30 am wakeup for me, because the train was "due" to arrive in Dunsmuir a little after 5:00 am. Owing to some outright miracle, the train pulled in at 5:15 am (!) and the adventure began. 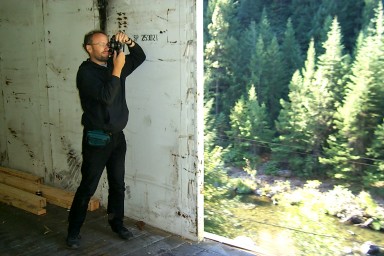 Herbert spoke almost no English, so Bernd and I presented him with a convoluted version of "Freighthopping 101" while we waited until 6:00 am for the Mini-Mart to open. In my haste to get out of the house at "0-dark-30" I neglected to bring any food, so I bought some cheese and rolls while the Germans stocked up on beer (as per my suggestion). With the sky still showing a few stars we piled into my truck and drove down to the lower end of the freightyard, where they hung out with all the gear and I drove back into town, parked my truck near the depot and walked back to our "camp" in the yard. 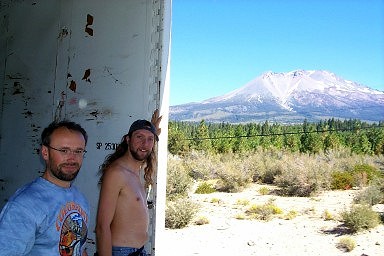 As luck would have it, a northbound train pulled into the yard on my way back and stopped on the siding just as I made it back to our gear, so we merely walked about 20 cars up, found a nice boxcar and climbed in. It was now about 7:30 am, and for the next hour and a half we constructed a "day room" in the front end of the boxcar with an amazingly complete set of "supplies" left there by the previous consignee - several dozen 2x4's, 1'x8' sheets of ¼" plywood with paper faces and 3 large pieces of cardboard that I brought along, topped off with our own assorted foam pads. The beer and wine was brought out and we "toasted" our new abode. A little after 9:00 am the second of two southbounds passed us on the main and we pulled out of town.

A beautiful fall morning began with a leisurely climb up the canyon north of town. An hour later we stopped at Black Butte to make what was supposed to be a one car pickup but turned into an hour or so of banging cars around trying to find our "one car". By now it was pleasantly warm and we had a great ride around the side of Mt. Shasta and up to Klamath Falls, where we made a 2 minute crew change on the main and continued on our way north at 4:00 pm. 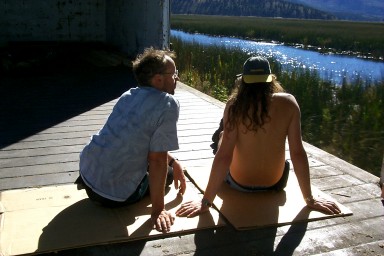 The ride along Upper Klamath Lake and past Chiloquin was nice but that straight stretch up to Chemult was as boring as ever, even though the alcohol flowed freely. We crested Cascade Summit just as the sun set below a distant cloud bank but managed to stay awake until darkness set in around Fields. Thanks to a smooth riding car we enjoyed a deep and restful sleep until we came into the east side of Eugene just before midnight. Not wanting to subject the Germans to a forced dismount at speed, we stayed on until the train slowed to a crawl as it entered the yard, where we uneventfully bailed out and began to walk back to "motel row" on the east side of town. 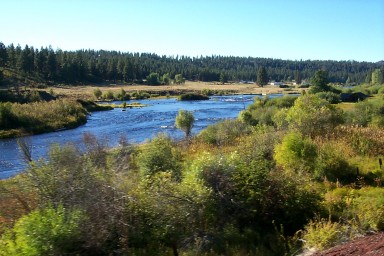 We soon realized that we couldn't have picked a worse night to try and get a motel room, especially at 1:00 am - the University of Oregon had just finished beating USC 31-30 after triple overtime and, believe it or not, there was some sort of Fraternity/Sorority convention going on (whatever that amounts to, but it did sound like fun). The first motel we hit had "no vacancy", the next one had been booked solid for three weeks, the one across the street had "no vacancy" and so on and so forth. We made several phone calls to others with no luck, and as we were mentally preparing ourselves to head for the nearest loading dock to sack out I saw a distant motel sign that still had "vacancy" on it. We staggered over to it just ahead of several other groups with similar intent but found that the only reason it wasn't sold out was due to a no-show who reserved a 3-room suite with kitchen for $195! This being a tad above our budget (considering it was now 1:30 am) I inquired if there was any space where we could roll out our sleeping bags. "How much money do you have?" the man intoned, barely lifting his eyes. After a moment's hesitation I answered "Seventy-five dollars" and was immediately shown what was to be our "home" for the next several hours.

Walking down a row of steps that led to a basement we found a large, windowless room with one bed but plenty of extra space to lay out two sleeping bags. It seemed to be partly used for storage, as there were numerous TV's, lamps and bedding. It did have a small bathroom/shower, and we utilized this facility to its fullest. After some gabbing in the darkness I drifted off to sleep at about the same time I'd woken up the previous day. Since there were no windows to judge the amount of daylight, I had to peel myself out of bed at 10:00 am so we could get our gear together and stumble out at 11:00, the checkout time. 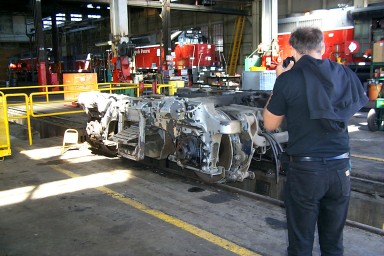 Emerging from the gloom, we set off toward the Amtrak station, where we'd all stash our gear until our respective trains arrived - their northbound was "supposed" to arrive around 12:30 pm and my southbound at 5:05 pm. We all hoped to have enough time to walk over to the freightyard and play "railfan" but if their train was on time we'd practically have to run. Approaching the ticket window we calmly asked how #14 was doing, and when the lady glumly replied "It'll be about an hour and a half late" we ecstatically yelled "Yesss!" and jumped up and down, a reaction I don't usually express in such an instance. Off we went to the yard, all the while comparing the trains of the U.S. with those of Europe. 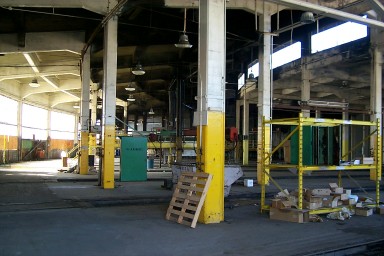 The few people we met while wandering around were cool with us walking through buildings and snooping around engines - funny the difference not wearing a backpack makes. Meandering back to the depot we had a few more moments to chat before their train pulled in at 1:45 pm. Good-byes were said and I headed off to explore what few "points of interest" were open on a Sunday afternoon in Eugene. An open bookstore was a welcome sight and provided me with diversion until my train arrived at 5:30 pm. After cunningly transferring the contents of a bottle of Fairbanks White Port into an empty Schweppes Ginger Ale bottle, I boarded my train and settled in for the ride back. Except for a noisy contingent of Operation Lifesaver clones seated around me, the ride back was reasonably mellow, made more so by the "Ginger Ale". Arriving back in Dunsmuir at 1:00 am, I crashed next to the depot and drove home in the morning, wishing my German friends well on their journey up to Seattle and across the High Line to Chicago and the flight home.