Monday morning an acquaintance came by to show me the way to the eastbound buses. It usually seems best not to tell people you're planning to hop freights, so I bought a ticket for the local bus to San Blas rather than ask my questionable "friend" to show me to the freight yard in Mochis.

I'd noticed a couple days earlier that San Blas is where the north-south coastal railway crosses the east-west Chihuahua-Pacifico line, and since I was planning on riding to Chihuahua, it would likely be a crew change.

Sure enough, as the bus got close to San Blas, we crossed an overpass at the north end of the small yard. There were locomotives around, as well as an old water tank, service facilities, and the platforms for the passenger trains. Although this station is rarely used, there is still passenger service on the ChePe line. It's one of the only passenger routes left in Mexico, but it's a popular tourist trip. They run two trains in each direction each day - first and second class. There's usually one freight per day too, and that's the ride of choice for lots of Mexicans.

I spent a couple hours looking around San Blas - it's a real western town, full of cowboys and dingy beer halls. The streets are dust and rock for the most part, and the overgrown railway behind the main street doesn't look too promising, but it is the right one. After a bite to eat I headed down to the rail yards, again not telling people about my real plans. The few people I talked to said the railway was dangerous because of bandits, but I convinced myself there would be no problem during the day. Everybody always blows those kinds of things out of proportion anyway.

In the yard there were lots of people around, including military and police. Catching a freight didn't seem too promising if they were watching the trains. One was leaving the station just as I arrived, so I asked the first worker where it was going. Nogales, he said. It was all containers on flat cars, and it was being watched closely as it pulled out.

I asked the same guy about trains for Chihuahua. He looked at his watch, pointed to some engines idling not far away, and told me there was one leaving at three. That was only a two hour wait, so I settled down on the station platform and waited in the shade.

I can see why the freight yards get a bad reputation for crime. There were some pretty derelict-looking people around. I chatted with a few of them, and turned down some coke that one guy offered. It made me a bit more comfortable having so many cops around, and that's rare.

At two thirty the same worker came back to me, and showed me the way to the train. I got on a grainer right behind the units, thinking that if it got too cold during the night there might be a chance to get in one of the cabs. It was about an hour wait before the train aired up, and during that time I watched all the yard activity. The workers seemed to be just playing with big metal toys, banging them around, and laughing, and climbing on and off. The one who helped me out was wearing a big straw sombrero, and always seemed to be laughing. His only advice to me was that riding freights is dangerous, and he made a gesture to show it could cut your arm off. 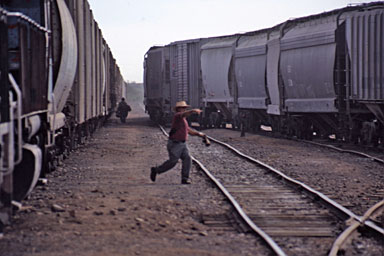 In the yard at San Blas. Helpful worker in foreground,
hobo in background

There were soldiers looking inside parked grain cars for some reason. Then there were some bums who caught a westbound to Mochis around the same time I climbed onto my ride. A surprising number of the same rough-looking hobos from the yard walked by, asking me when and where the train was leaving. Maybe rather than want to rob you, those guys gain a bit of respect for anyone who's down there riding the rails with them.

We crept out of the yard only half an hour late. I waved goodbye to the folks I'd met around the station, and kept a bit of a low profile for the cops, but they didn't care anyway. As long as you're not breaking into boxcars or containers you can ride freights all you want in Mexico. 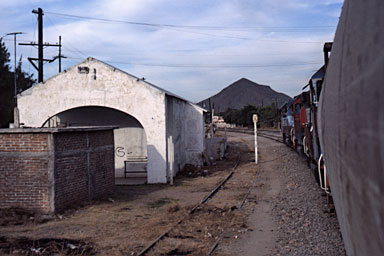 Riding east through San Blas on the train to Chihuahua

We cruised back through San Blas, but there was no sign of people I'd met there earlier. Just outside town, the train slowed right down and blew the horn. I leaned out the side to see an old cowboy on horseback trying to scare a dozen cows off the track. Once they were clear we picked up some speed, then stopped to throw the switch for the ChePe line, then cruised not-stop till well after dark.

It was too bad the train left when it did. The best scenery on the line is between El Fuerte and Creel, and for me that was all during the night. The other thing is it's pretty cold around there in December, because of the altitude. The ChePe climbs from sea level at Topolobampo, gradually to El Fuerte, then steeply to the summit of the line, which is around 2500 metres above sea level. At that height, it gets cold enough at night to freeze all the puddles and the little streams you see once in a while. 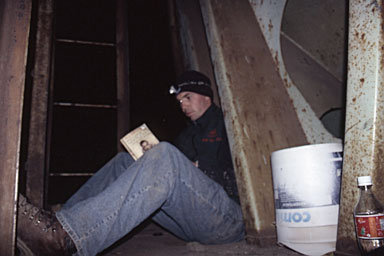 All night I froze on my grain car. For a while I stayed up, and watched the headlights lighting up the opposite side of the canyons - vertical walls rising hundreds of metres up to the starry sky. I could tell once we were into the good part of the ride because of all the tunnels, and because there was a cliff rising up on the left of the train, and dropping away on the other. On the whole trip, there are eighty-seven tunnels, and most of them are clustered all together in the really rugged sections. I welcomed them, mostly because as it got colder, the tunnels were like little havens of warmth, where I could suck in the heat (and exhaust) left there by the engines. Eventually I settled down, though, sleeping in fetal position in the little steel cubbyhole that good grainers have. It was cold. 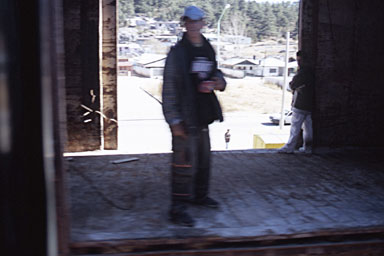 Hobos in boxcar at Creel

We stopped three times during the night: Bahuichivo, San Rafael and near Creel. San Rafael is the crew change point (the only one) and Creel is the main tourist destination. San Rafael is the only spot you can count on catching a freight. They also do inspections there, but they don't care about riders.

In the morning I got up as soon as it was light, and started stomping my feet, waiting for the sun to break the horizon. We cruised through the plains, having crossed the mountains in the dark. I took the chance to climb to the top of the train for a couple pictures, but I wouldn't stay up there too long. 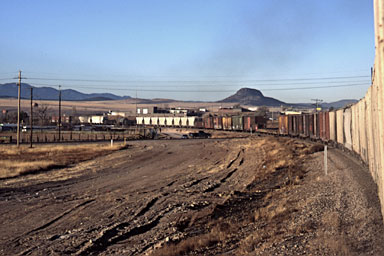 View toward rear near Chihuahua

When the sun came up the trip got a lot more pleasant. We dropped some cars at a little grain loading facility, and picked some up at others. We crawled through the city of Cuahtemoc, and passed the two westbound passenger trains. I was getting a kick out of watching the operations - it's all manual switches, and there are no signals on the line at all. Somehow they manage to time their meets almost perfectly, and spend no time sitting on sidings waiting for remotely-controlled switches to change.

East of Cuahtemoc there's some good scenery too. The train climbs up over a bit of a pass, then descends steeply down the other side. I first noticed we were going downhill when I saw a train going the opposite direction from us, but higher up, and only half a mile away. Of course it turned out to be the tail end of the train I was on, and that was the first of two big horseshoe curves. Then there's the spot where you're crossing one trestle and can see the next one down the valley, a couple miles down the line. There are two more tunnels in a bit of a canyon, then they open the throttles for the cruise into Chihuahua. 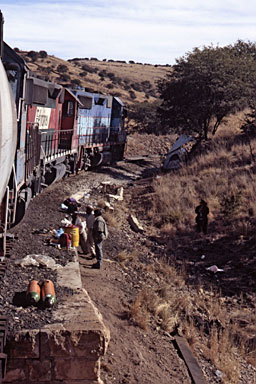 In the hills between Cuahtemoc and Chihuahua; bridge painting crew waits for train to pass

Although we were in the city already, the excitement wasn't quite over. None of the railway crossings have any kind of signal in Mexico. So we were just getting onto a crossing when the air brakes hissed and we came to a stop. My first thought was train robbers, as there were a bunch of people coming towards the train. It turned out we'd hit a car in the crossing, though, and everybody wanted to come see. There was damage to the car but no injury, but we still waited around, blocking the intersection, till the cops showed up. People climbed over the train at my car to see the action, but there wasn't much to see. Eventually we continued, and I was put on parade for all the cops standing around, none of whom cared. Then we passed the real damage from the train-car collision: a cop car and another one, in an intersection, totalled. I couldn't help thinking the cop was in a rush to see the train wreck when he slammed into another vehicle. 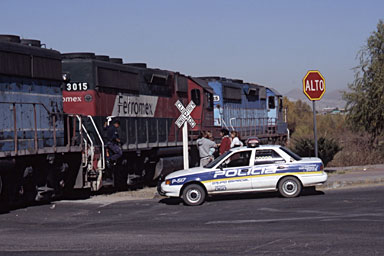 Around 1pm I jumped off the train at the ChePe passenger station, which is closer to downtown than the freight yards. There's a water tower there, but the station itself isn't right on the main tracks - you have to watch for the spot. I then walked right through the station yard, asked about westbound freights for a ride back to Creel, and continued in to town. Chihuahua is one of the nicer Mexican cities I've been to, so it's worth a look around.