getting out of town 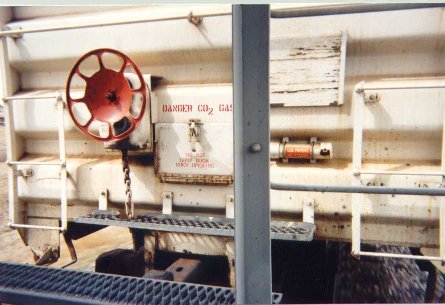 I told my grandmother that I'd like to come and see her. But, I said, it's too far to drive alone and I don't like flying. I told her that I'd probably be riding the rails and if I made it down to Phoenix, I'd call her. After work, at my job at a tire store, on Friday before spring break, I packed up and hit the yard. Friday evenings are notoriously slow in Missoula, and I was all set to wait it out. While I was sitting there, I met a hobo who was trying to get back to Eugene, OR. He had on corduroy slacks and a deep, phlegmy cough. We chatted and laughed for a while about the freemen and the Unabomber. But he rolled out of the yard to find some buddies after an hour or two. When it was full dark and no train had yet arrived, I saw a kid (about 14 years old) sprint by me. Moments later, a car with a searchlight appeared in the distance. Tires spitting gravel, it came barreling my way. I had plenty of time to slide out of there, but I figured I was not the object of interest. The purple pick-up sped past me, and then skidded to a halt. It was a 1995 or so, 2WD Chevy S-10, with aftermarket chrome wheels and a fancy airbrush paint job: "Argus Security". The guy driving couldn't have been much older than me. You chasin' somebody?" I did my best drawl. "No, why?" He asked. "Well, I just saw a kid run by here", I said, more nervously. "Hmm. You know you're on private property? Let me see some ID." "Who are you with?" I asked slowly. "Argus Security for Montana Rail Link." I asked him how long they'd been doing this but he only knew what time he came to work and what time he got off. I think this guy had a lot of things he'd rather be doing at 10:30 on a Friday night than talking to me. We went through the usual show - he writes my info on a card, tells me not to ride the trains. He didn't tell me to leave, though, and added, "Once I'm gone, I don't give a shit what you do." [Maybe I should get a Fake ID...] I was very discouraged. I mean, If I can't get out of Missoula without getting busted, how could I make it down to Phoenix? So I walked across the street to my apartment and drank the rest of the milk in the 'fridge. I picked up a few odds and ends I'd forgotten: pen and paper, sunglasses, aspirin. I sat in my recliner in the dark, thinking, "What the fuck am I going to do now?" Not five minutes later a heard a familiar rumble and rushed to the window. Sure enough, it was an eastbound, but on track four. That was unusual, and I would have thought that it was a local, but it had BN and SF road power. I wasn't sure, but I ran over and climbed on a hopper. The train stopped and cut the air. I got off and started walking east along the main track. Foiled again, I thought. "Might as well go to the bar and get drunk...," I said to myself. Then, off in the distance ahead of me, I saw a winking FRED. Then it occurred to me that the FRED was on the front half of the train that had just arrived. I should've known - I'd ridden that train to Helena at least once before. I walked the half mile or so to the blinking FRED. The night was warm, suggesting the forecasted 70's for the next day. I grabbed an ACF hopper four cars from the end and stuffed myself into the cubby hole. The train rolled out of town before all of my limbs fell asleep, at about 11:45 pm, and I climbed out. Reclining on the porch of the hopper, I sucked back some T-bird and fell asleep under the bright, but not quite full moon. I was eastbound across the rockies.

Good Friday had just turned to Saturday, and Sunday is Easter. I am not much of a religious sort, but there is something to be said for tradition: I hoped to find a good Easter dinner. Heading out of Missoula on Friday night, I was elated. I had been in nervous anticipation of this all week, and the feeling of freedom was delicious. It was slightly warm and I slept soundly. I had made this first leg of the trip many times before. I woke up just at the top of Mullan pass, before the train dove down into the tunnel. I was awake in Helena, and I crawled back into the cubby hole, just in case. Then, I crawled out of there and slept more. It had been a long week and I was dreadfully tired. When I awoke again, the sun had already broken through and was warming the earth. The train was stopped on the eastern edge of Bozeman, so I got off and stretched. I got back on, and around 3 pm, I rolled into Laurel, MT. I had been to Laurel a couple of times before, and never been eastward from there. As far as I can tell, there isn't a lot of straight-thru traffic. The train I was on pulled all the way into the yard, and cut the power. I saw it cruise by me over to the engine shop. The same thing happened to an eastbound stack train only moments later. I sat on the hopper, pondering what to do for about an hour, and then got off and walked to the far east end of the yard. There I sat and waited. I looked at my map, and then realized that I had been thinking wrong. The line to Denver heads out to the south, not the east. What I had thought was a spur line to the refinery was actually the way I wanted to go. When I got up to amble over there, the train I had rode in on was powered up and ready to rumble. I was ready to get out of town sooner rather than later, so I caught it on the fly, about 25 cars up from where I had been, and we rolled east. Four TOFC/COFC's had been tacked on to the end. I knew I was headed either to St. Paul, MN or to Alliance, Nebraska. I saw Billings pass by, and at Jones Junction we took the south fork. I saw Hardin and Crow agency, MT, and then after dark I rolled through Sheridan and Gillette, WY. The train had been making pretty good time, but after daylight, near Edgemont, SD, it stopped. This is coal country now, and I guess coal is king. I sat for several hours, it seemed, waiting for 6 coal empties to slide by westbound. I was kind of excited to see BN SD70MACs, though; We don't get those through Missoula. Even got some on my train as helper units for a minor grade in NW Nebraska. At around 3 pm on Easter Sunday, the train rolled into Alliance, Nebraska, and I dismounted at several mph. I was in full daylight, full sun, and I was sweating like a hog. I set out to find my pal Nimrod. Nimrod was my roommate at my summer job last year, and all I know is his last name and his town, Alliance (pop., 10,000). I went to the nearest gas station and got a phone book. 13 "Elgerbelgers"... I had 2 quarters. I was in a great mood, but a bit discouraged now. So I asked the girl at the convenience store if she knew Nimrod, and she did, so I got his number and called him.

Anyway, you get the idea. We talked about good times and good friends, and watched some TV and had a chew and a beer. Nimrod's Dad, Welton, works for BN and was extremely helpful. They also fed me a wonderful Easter Dinner, and after dark I headed out. Welton chauffeured me all around the yards. There are two yards in Alliance: a North Yard and a South Yard. Alliance is the junction between the BN routes from Laurel, KC, and Denver, and handles mostly coal. The north yard handles E-W traffic, and the South Yard handles empties going back to the Powder River Basin coal fields and loads going to Denver. I figured my best bet was to wait at the far south boundary of the yard, and wait for a loaded coal train going south. I got to the yard at 10 pm, and soon one rolled out. But I couldn't tell for sure if it was loaded, so I skipped it. I then walked about half a mile north, and sat on my pack adjacent an old Chevy coupe in a junkyard. The yard is new, and very well lighted, but I thought I was pretty well hidden, and had a good shot at anything going south. But nothing was going. I slept off and on through some cold drizzle. Actually, it was the coldest night of my trip. I was pretty discouraged by the time that grey traces of dawn were tingeing the eastern sky. I thought that any passing train would have woken me up, but I couldn't figure out where the train I was looking at came from. It was loaded, and it had southbound power. I looked at it for a little while, and said, "Fuck!" and climbed aboard just, in time. "I'm going to Denver", I chuckled, and settled back in a bed of coal to watch a magnificent Nebraska Panhandle sunrise. But this coal load wasn't going to Denver...