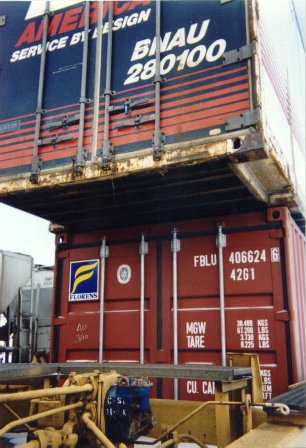 Okay, we left off where I was sitting under a pig near the east end of Yardley Yard in Spokane, wainting to head eastbound. It was pretty cold, about freezing, and it was snowing. Nothing was happening.

Nothing, except that same green Jeep driving by, every 20 minutes or so. Now, I had reason to believe that it was a bull, or a railroad police officer. I was in plain view, if he bothered to look at the train. Besides that, the temperature was dropping, and where snow had been melting on the flatcar, it was now freezeing. I didn't want to ride all the way to Chicago on a TOFC. There's almost no wind protection behind those tires, and security is nil. I decided to avoid the bull and get back to the overpass and wait for a COFC, even if it took all night.

So, I jumped off the train and started walking. I was right by the other overpass, the one to the east of Yardley Tower, and I wanted to stay out of the yard, (because of the bull), so I started looking for a way back to where I'd been via surface streets.

I paused at an old graffitti-covered shack, and found my mark from December of '95, when I'd been here before. Actually, I'd been to Spokane four times before. Each time, when I headed east, it was for Missoula, and only once had I made it there. The others - Whitefish.

It turns out, it's not that easy to get around Spokane! I had on my big Sorel Boots, which heated my feet to the uncomforable level in a hurry. I walked all around in that quiet, freezing raining, snowing, Saturday afternoon, down a couple of dead ends, until I found a main street. I trundled past the fairgrounds, and around back to Yardley Tower. Then I walked back along the main tracks, to my original spot, set my bag down, sighed, and hid behind the pillar.

I was just in time, for the now all too familiar Jeep drove by, across the tracks. I kept the bridge support between me and him while he drove around for a while, and then back to the other parts of the yard. I sat and thought about what I was going to do with the rest of the day.

Not ten minutes had passed when I looked up just in time to see the jeep approach but not enough time to hide. He rolled down the window and yelled across the double tracks, "You want a ticket?". Then, "Well, get off the property". So I packed up and left. I walked up to the surface of this bridge and started exploring Spokane again, this time a bit more disgruntled than before.

There was a lot more traffic than there had been a few hours before, and I looped around to north and west on the sidewalks, to the next bridge over the tracks. It was a little rickety timber structure, to the west of where I'd been, and which I had seen from my previous perch. I walked across it, and then back east, to a gas station just two blocks south of the bridge that I'd been waiting under originally.

I bought and drank a Pepsi and watched the Saturday evening traffic. The snow had turned to rain by this time, but the air was still cold, just above freezing. It was getting dark and fog was getting heavy. I called Amtrak to see when their train was leaving Spokane, but it wasn't for 36 hours. I figured if I wasn't out of here by then, that's the route I'd go.

I stayed there, at the convenience store, until dusk, and then walked back to the bridge, figuring I'd just get the next train out, and if it went to Missoula, I'd just have to re-plan from there.

Whistling a somber tune, I crested the embankment above the tracks and saw a string on ribbed 48' wells with 40' containers! I ran down to them, after a quick check for the Jeep, and took a peek in the first one I came to. No bottom! I ran down the train for another. Two cars down, I found one with a solid bottom. Not only that, the top container was a 48-footer, making a bit of a roof on my compartment. I climbed in after my bag.

Water! Water everywhere! I guess central Washington saw a bit warmer weather than Spokane, because this car was all wet. I sat on my plastic bag and fired up the scanner. I hadn't seen this train come in, so it could be a westbound, or a Missoula-bound. I listened for clues and heard my magic word, "Chicago", so I laid back and waited.

The lights of the city diffused into the low-lying clounds making an orange-pink aura above me. The air brakes hissed and the car began to move. As it did, torrents of water ran off the container above me, soaking my legs and hat. I moved to the other side of the car, but it was not any dryer. It was about 7:30 pm, a full twelve hours since I'd arrived in Spokane.

I could feel the train move to the east end of the yard, pause momentarily, and then pick up speed out of town. I wasn't sure how to go about making a dry place to sleep, so I stood most of the way to Sandpoint, Idaho (about 70 miles, and the junction between the "hi-line" and the "low-line").

I waited to relax because I was not sure that this train would be going where I wanted it to go, but after Sandpoint I would be sure. So I paced about in anticipation as the single track across the causeway over Lake Pend O'Reille turned into triple track. Then I saw the junction.

Chapter 4 - Back to Montana 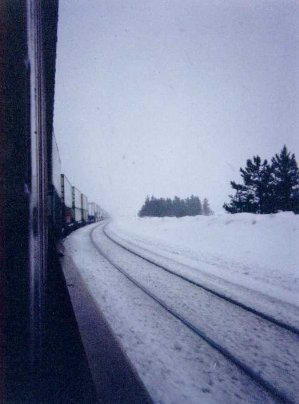 I was riding a freight train through Sandpoint, Idaho, on the Burlington Northern Santa Fe Railway. I wasn't sure if the train would be going to Whitefish, MT or to Missoula, MT for the next crew change, but I was about to find out. The single track over Lake Pend O'Reille had become triple track, and my train was on the north track through Sandpoint. Soon, it passed the Amtrak station, and then I saw the Montana Rail Link track to Missoula diverge from the old Great Northern trackage. We passed a sign: "Welcome to the Montana Division!", and I waved good bye to the tracks I had rode in on.

It was a very relieving moment - I now knew that I was headed for Chicago, or a least Minneapolis, and that I'd be there pretty soon. Of course, I was farther away, in mileage, from Chicago than I would have been in Missoula, but I figured that this train was a sure shot.

As we began to climb into the mountains, along the river, the air turned colder. As soon as I had verified the course of the train, I sat down to eat a can of chili. When I started, there was still water on the floor of the well, and the air was warm. By the time I was finished, the floor had become a sheet of ice, and my hands were numb. It was cloudy, and thus nearly pitch black outside the train. The air was full of little particles of ice which burned my face.

I spread my plastic bag onto the cold steel, then stood and wrapped my blanket around me. Resting my head on my pack, I lay on the plastic and slept. I dozed easily that night, the blanket kept the wind out and the water did not penetrate my clothes.

I woke a couple times in the darkness, stood, and enjoyed the cool breeze and rhythm of the rails. The tracks up here are all laid on concrete ties and are very smooth. I did not wake for the Flathead tunnel.

The crew change in Whitefish occured at about 3:30 am. It was fast - barely a few minutes, and then I fell asleep for the last time that night. When I awoke, we were stopped on Marias Pass. I could see the train stretching down the grade behind me, and a second set of tracks beside me. The snow was deep. Not only was there a layer of new precipitation on me, and the tracks beside, but the snow along the tracks was piled tall.

I ate my breakfast and watched the sky lighten. The clouds were so thick, they looked like smoke all around. There was no chance of sun today.

We were stopped there for a couple of hours, with no activity. I thought about getting off the train and wandering around, but I was afraid I would fall through the thick snow. This was, after all, Glacier Park, on the tail end of a particularly heavy winter.

Finally, I heard a noise and saw a headlight to the east. It was not a train, but a plow. I watched it rumble down, past my train, and then I heard it return, adjacent to the tracks, behind a mound of snow to my right. Pretty soon, we were off again!

The train curved around the helper station at Essex, and the Isaac Walton Inn. The hotel was still decked out in Christmas lights. A beautiful, if outdated sight, in this foggy, snowy, wet Sunday morning.

We passed a westbound mixed freight right after that, and then continued to snake up the pass. I could see two BN helper units at the back of the train, and five units at the front. We glided through snow sheds, and around curves. I must mention the snow again: everywhere! Last time I'd been through here, it was January 1996, and it wasn't nearly this white. The air had a chilly bite to it, but I could stand and watch the scenery without being bundled up, because the wind level was pretty low at the speed we were going.

Water was dripping off the trees, and I could see places with big masses of snow had tumbled down the sides of mountains. There were a few birds chirping.

At the top of the pass, Summit, I tired of it all, and went back to sleep.