After visiting family and friends in Michigan, Emma and I went off to Canada. We were gonna leave from Battle Creek, but had second thoughts. I have hopped outta Battle Creek to Chi-town before, but never the other way. We decided to hop out of Port Huron instead, our only problem was getting there. If anyone has ever been to Michigan they know that hitchhiking is out of the question. So after asking my family, my brother and his girlfriend said they would drive us up there.

A couple days later we set off to Port Huron. This drive was long and hot because only 2 windows rolled down. I'm glad we didn't try to hitchhike because there was a rain storm on the drive up. We got to Port Huron about 10 pm and located the yard. We had read in the "guide" that you can just walk right in the yard and ask questions, but we decided not to do this. My brother and his girlfriend didn't want to drive back through the storm at night so they got a hotel room for the night. After sneaking into the hotel, Emma and I stayed the night with my brother and they drove us to the yard in the morning. 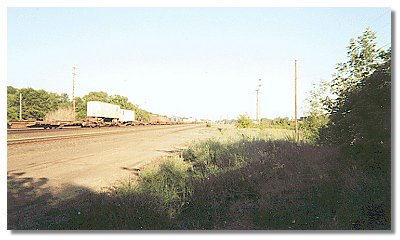 When we got to the yard entrance we had second thoughts of walking right in. We remembered seeing this train bridge the night before, so we had my brother drop us off there. This is next to an old run down store called "Whiskey Pete's". We said our goodbyes to my brother and his girlfriend and made our way up to the tracks. From where we were we could see the yard, and were maybe about 100 to 150 yards away, so we took cover in the weeds and waited. I could see trains building in the yard but they were mostly autoracks from what I could see. Emma wanted to go back to sleep cause it was early, but I was ready to get outta Michigan. About an hour passed and a CN stack/pig train pulled up and stopped in front of us (photo above). We were getting ready to get on it when another train passed us in the wrong direction. So we had to wait for it to pass before we could board our train. Once the train passed we crossed the tracks and then climbed over the IM train and walked down the side 'til we found our car. Once we got on we sat there in the morning sun for about 30 minutes before taking off. 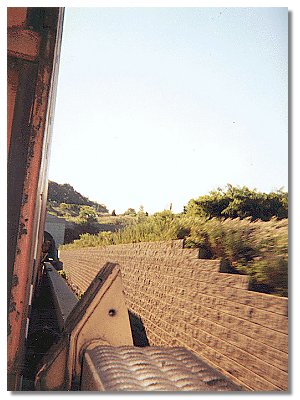 We started to pull off towards Canada. About 3 minutes after we left we entered the tunnel to Canada (photo at left). This tunnel is nice about a minute or so long. It goes under the Detroit River and once you come out you're in Canada. Our train hauled ass the whole way. This is also a nice ride, lots of good scenery and at one point we were cruising through this city which we were above the city. The tracks were up on a hill and the city was well below us, I'd say we were a good 3 stories up because we were passing warehouses level with the 3rd and 4th floor. Once we got on the train Emma went back to sleep right after the tunnel. I busted out the rest of the whiskey from the night before and had a nice ride. The whole trip was about 6½ hours. Below is a picture of a city off in the distance somewhere before Toronto. As you can tell by the picture we were hauling ass. After Emma woke up we talked about the Toronto yard and at that time we decided to get off before the yard if we could. Just our luck we stopped right outside Brampton, the"guide" says this yard is super hot with cameras and a bull. But we had no problem rolling through. We didn't see any cameras or a bull. We stopped right outside the yard after rolling through, we thought this might be because someone saw us. Later we found out that all trains stop to get clearance to Toronto's main yard.

After debating for a while we decided to get off here. Under the bridge we found a good waiting spot with seats and everything if you ever wanted to hop outta there. We did see some workers off in the distance but figured it was just best to get off property. We ended up walking FOREVER in the hot ass sun to a bus stop. These 2 old guys gave us bus fare after talking to them for a few minutes. We took the city bus and then the subway to Toronto. Once in Toronto we stayed there for a couple weeks. We had a great camp right on train property, but they didn't care at all. We mostly saw GOTrains (local transit) but sometimes we got to see freights. But what was nice was the workers knew we were there and didn't care at all.