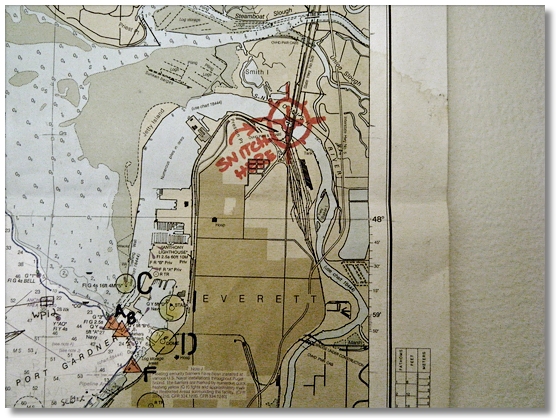 Cyd and I were headed to Alaska in the spring of 2012. We needed to get to Bellingham by Friday to catch the M/V Columbia which sailed to Ketchikan. Our 16 hour ride on the Monday morning baretable train got us a speedy start and let us off in Tacoma. From the Tacoma docks, our friend Jim chauffeured us to Seattle in a sporty yet luxurious Jaguar XJS. I have rode trains with Jim for years and he would join us on the Everett to B-ham leg of the trip.

After losing a chunk of savings for the trip while gambling and spending a few days in the Rainy City, we 3 packed our gear and took the Jag north to Everett. It was Thursday night and our last evening to catch a northbound to Bellingham. Jim parked the car at the marina before the gang of us hiked to the edge of the Everett yard.

With the limited time allotted for catching a train, the next rattling piece of metal to roll our way would be the ride. The train came slow with the lead unit one step-up from a yard dog. It appeared to be a local but our destination was only 60 miles away so we decided to chance it. The future looked sketchy as each of us grabbed a gondola ladder and swung aboard.

While passing under the drawbridge outside of the yard we got comfortable and began sipping various liqueurs to stay warm. Rain continued soaking our clothes and making the dust in the dirty ride turn to mud. The train staggered along at an unfortunate pace, which is typical of rides on slower junky freight cars. Marysville was only 5 miles north and when we came to a stop between crossings in the downtown it was time to pay attention.

Jim turned the scanner on and immediately thought someone said, "...until law enforcement arrives". I started to get ready as we waited for a confirmation of some type on the radio. In the past it has taken law enforcement up to an hour to arrive after being spotted but that was not the case in Marysville today. I peered over the side while ready to jump and noticed a Marysville police cruiser already parked 2 train cars ahead.

At this stage every second counted in trying to beat the authorities, so I instinctually ditched my bag and sprinted toward the far corner of the car to scramble over the side. As I started to pull myself over it dawned on me that my gear was more important than a ticket in consideration of the ferry to AK only hours away from leaving. With Jim gone and Cyd standing by, I put my head over the side with the cop car to see if the remaining 2 of us could toss the gear and run. He was standing 20 feet away and looking right at me.

"Hands up or I shoot!", the policeman yelled. Cyd and I put them up to surrender and for the first time in a long while I sighed, "you got us". As the defeat started to settle in, I wondered if Jim would make it away free. The officer inquired in a threatening tone as to who the 3rd subject was so I made up a travel name and told him that was all I knew. It took a Burlington Northern Santa Fe cop a few minutes to join the party which seemed very punctual. After he took a look in the gondola it was time to load the gear over the side and dismount the lame horse we rode in on. 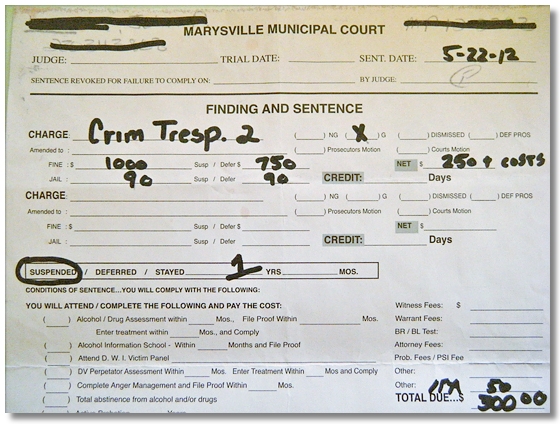 After getting our info a police cruiser pulled up to the crime scene with Jim in it. He would have gotten away if it was not for a concerned citizen reporting his whereabouts. Cyd and I were going to be cited and released because it was our first time on the trains (wink wink). Once the local police discovered this was Jim's 3rd time trespassing they decided to haul him to jail. Before taking our friend away the officer in charge let us know that they would release him with $300 bail after booking.

The 2 of us waited an hour outside the jail before they were ready. With $300 in hand I signed the paperwork and Jim was let free. We humorously sang, "got a criminal record, I can't cross state lines", by Chad Kroeger as Jim kicked open the door to freedom. It was time to laugh and chug a few beers over our inconvenience and the loss of the delicious Lemoncello liqueur that was left with the train.

As time passed and the police reports were read, it was discovered that the bridge watchmen called us in. He must have had a perfect visual from the tower above us. The report indicated they knew about all of us from the start and which ride to look for.

Going to court was not all bad. The judge and courtroom even seemed to enjoy a break in the monotony of suspended licenses, DUI's, and domestic violence cases. When Jim appeared before the judge she even acted delighted that someone was out in the world seeking adventure and thrill.

The scanner, cover of darkness, or a better ride could all have alleviated the time and money wasted. It is easy to get annoyed with the whole affair but I think of all the places I have travelled to and from, without a hitch and it makes me smile. Since a ticket with CSX in 2003 I have rode countless miles for no charge, but that is not ultimately why I continue to ride. The feeling of freedom that comes from riding a train is far greater than the headache of getting caught. 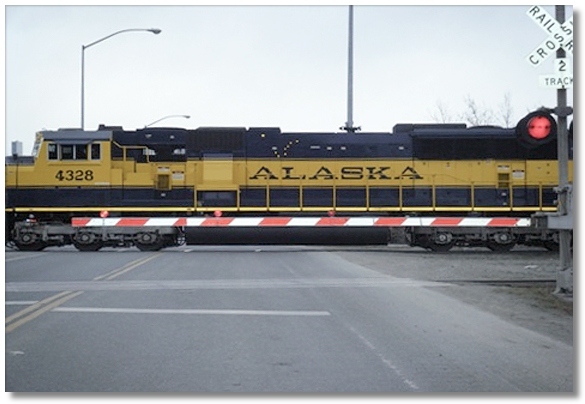 In the end, we made it to Alaska, took care of the tickets and are criminally trespassing on train cars all around the country and soon enough, the world.