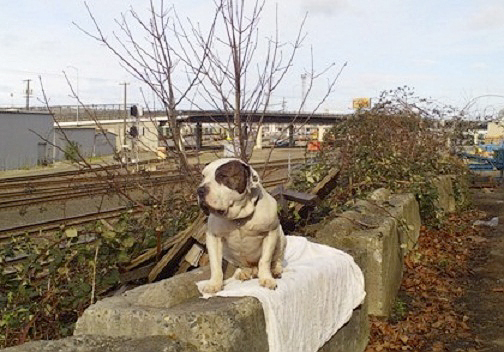 Just as we thought the last trains had left for the evening, a Burlington Northern & Santa Fe general manifest rolled to a stop on the trax south of the Interbay yard throat. Up to that point Alabama's first train trip had been more of a bum trip because of all the time spent sleeping on cardboard in vacant industrial lots and waiting under overpasses in the greater Seattle area. After 3 days of this our luck changed with Bama, Ralph, Cyd and myself ready for a new adventure.

We crossed Elliot Avenue and crept into the shadows of the tall commercial buildings alongside the mainlines. The train was made up of random assorted freight that we hoped was going to pass through Tacoma and get us into Vancouver, Washington while it was still night. Any time wasted along the way meant that our cloak of invisibility would be pulled away with the rising sun. In consideration of the extra weight our 9 year old bulldog provided and the lack of rider friendly services the destination offered, our arrival would be problematic without dark skies.

We found a deep grainer porch and climbed in to prepare for the next leg of the trip. Ralph was not going to ride south with us on this adventure because he wanted to catch the Northbound Z-train that would get him to his buddy's house in Wenatchee. After parting ways with the fourth crew member the coupler nearest to us tugged hard and we slowly picked up speed, chugging with conviction through downtown Seattle.

Bama was alert from all the new sounds and sensations. He looked at us and then outward toward the racing cityline as we cruised past the Stacy and Argo yards where we had spent so much of the last few days exploring. Our original plan was to catch the Friday night Union Pacific double stack out of Argo, but we did not get there until Saturday. Riding BNSF was our second choice because of the work the junks often do en route and the long walk remaining when traveling to Portland from Vancouver. 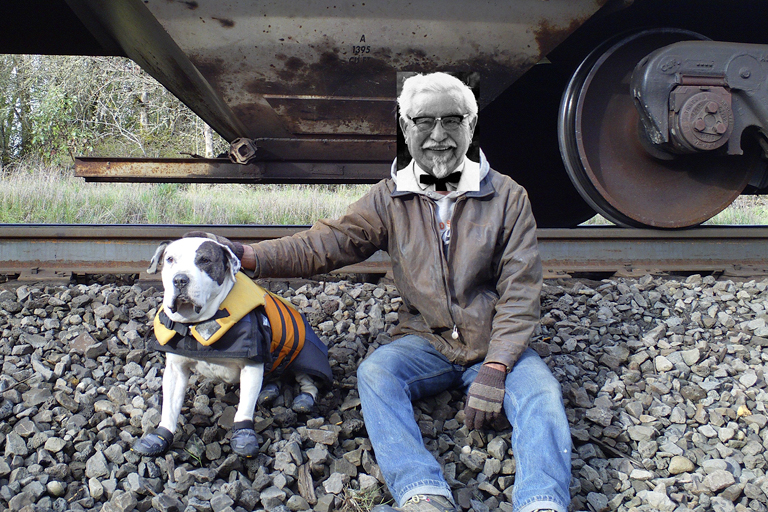 The train stopped in Centralia to pick up more cars with twilight on the horizon. We were a little less than half the distance to our destination and it was now certain that the sun was going to be above us upon arrival. I hypothesized that the train would roll slowly on approach to Vancouver and we prepared the gear for the potential of a moving dismount. Our main concern was the fencing that stretches along both sides of the yard and the difficulty it presented when towing a 65 pound Canis lupus familiaris. If we could manage getting the bags, dog, and ourselves off while moving then we might be able to avoid complicating the matter. These plans would be reassessed as we flew past the yard throat at twenty miles per hour and into the railroad compound.

With plenty of light left in the day we came to a stop at the signals well within the BN fortress. A stopped tank train with Canadian Pacific units was to our right while a moving string of cars being built or dismantled was to our left. The options for escape were looking slim and time was not in our favor as the train would likely make its next move soon to avoid backing up the already congested route.

With only moments to decide I hopped over the tanker to see what the situation on the other side looked like. It was secured with chain link below razor wire as far down as I could see and a stopped vehicle remained parked twenty cars away. The overt difficulty of disembarking on the tank train side forced us to consider other possibilities. Dragging Alabama over the moving string to get to the far side of the yard was not an option either. The journey had come to a critical juncture and the next decision would determine a pass or failing grade for the University of Hobos course in Bulldog Trainriding.

Staying on the grainer would provide us with good protection and maybe give us the chance to bail overboard on the slow curve southeast of the yard. Vancouver has a large wye junction at the south end where all easterly inbound and outbound freights roll under ten miles per hour. If we were on a through train this could work, but getting off while moving with Bamalamb and/or the chance of stopping deeper in the yard, provided cause for further evaluation. Cyd wanted to move and I did not want to stay so when she discovered the stopped vehicle had left we made a break for it.

Cyd shouldered both bags while I carried the petrified dog. All the stress and rapid commotion in the moments before had numbed the Bully-Pit with fear. He was completely stiff and would not stand on his own or indicate whether he was still alive or dead. If he could speak English I am sure he would have questioned our tactics and for what purpose.

We carefully traversed the Canadian tank train, expending more energy than a half marathon, with the hope of finding a break in the fence. Thirty cars down our prayers were answered. An opening where two posts met without a fence between them was in range and we exerted all that was required to get through it quickly. I owe the builder of this section a case of beer and a steak dinner for making the three of our lives a lot easier. 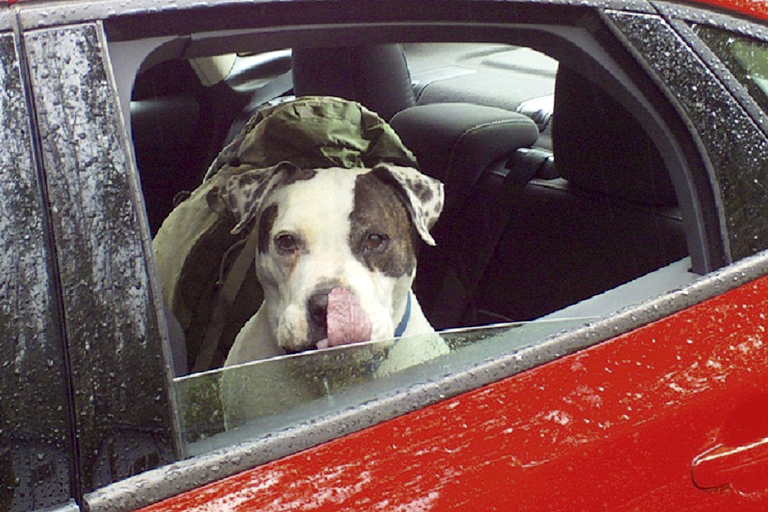 Once we were all off the property it was time to smile and laugh at how simple it all seemed in hindsight. Bama calmed down enough to show signs of animation with a long whiz on the metal barrier. We were free from the yard and Alabama officially rode his first, and probably last, freight train. The rest of the journey home came with the assurance of a rental car paired with the accoutrements of drive-through burgers and coffee. I could reconstruct a fantastic ending about how much Alabama loves traveling on trains, but the truth is that the journey was a nightmare he will gladly forget while resting comfortable next to a hot fire indoors and far away from the sounds of a "Hobo's Lullaby".