It had been six years since my last long Western ride. Back in 2006, I'd ridden Elko-Salt Lake City and Ogden-Elko, first along the southern shore of the Great Salt Lake and then back to Elko on the freight-only route with the 12-mile-long causeway across the shimmering, pungent lake.

Since 2007, I had aged or, more accurately, rotted in a part of the country where I moved solely to work, with only two un-disastrous but less than transformational journeys to Harrisburg, PA, and Brunswick, MD, to tide me over.

This time, after cobbling together the vacation time, I was headed west from Cheyenne: either 484 miles to Ogden or 552 miles to Pocatello. I was hoping for Pocatello, having heard that going there was more scenic. The westbound Union Pacific line forks in Granger, WY, 30 miles west of Green River. Both Cheyenne and Pocatello had Amtrak service but lost it years ago.

I'd handed in my rental car after heading 30 miles out of town that morning to check out a 19th-century monument, a pyramid dedicated to the railroad-building Ames brothers.

The rental car outfit gave me a lift downtown, where I stopped being a gawking tourist and reverted to type. I'd been in town 2 days and drew comfort from the sight of men with frame packs. I knew what they were.

After comparing the east and west ends of the yard, I'd chosen the east. The Cheyenne yard has a menacing control tower with a commanding view of the entire yard; for that reason, I preferred the eastern end, which had marginal tree cover. 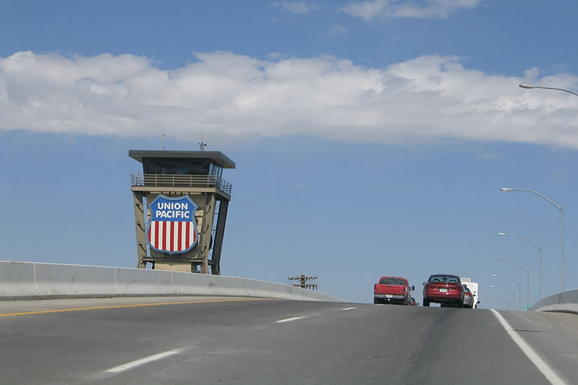 The east end catch-out spot is at about 13th and Morrie. Incidentally, a Big Boy steam unit from the 1940s is not far away, in Holliday Park, if you want to indulge your inner train geek.

I found a run-down small business that had some trash trees growing around it, which was more than one could say for much of the largely waterless capital. I was grateful for the shade and the cover from prying eyes. Periodically, like clockwork, a cement truck would zip past, but the various drivers were strictly doing their job and never looked in my direction.

I had been hiding only about an hour, with a paperback to tide me over, when a westbound hauling bulk commodities finally pulled in. Its appearance was a relief on an afternoon of staring at gleaming, empty mainline tracks. I had been starting to worry I might have to hop a train at night - great for hiding but not for scenery.

As it slowly rolled past, poised to take on a new crew at the old depot, I stared in dismay at a succession of cars I couldn't use: tanker cars (no hiding place), reefer cars (a deck with mesh on one side, total exposure on the other), and grainers (now lacking the cubbyhole, forcing one to sit exposed on the end of the car). Worse yet, two civilians had seen me standing beside the tracks.

They were two of the cement truckers who had been hauling loads back and forth every few minutes. There was no way they could miss spotting me; rather than blatantly grab a car in front of them, I walked away from the train for a few seconds. However, neither one made eye contact with me. I hoped - correctly, it turned out - that they were jaded and indifferent to train-hoppers, an everyday phenomenon in Cheyenne.

They drove out of sight, after which I scrambled into the second-from-last unit (locomotive) at the rear of the train, which had two units up front and two vacant units at the rear to push it over Sherman Hill. Empty units are unquestionably the best ride, as long as nobody sees you. Still, it was stifling hot aboard, this being arid, blazing Cheyenne, and even hotter inside the windowless, dark crew bathroom, where I rapidly disappeared. Several minutes went by before the new crew finally spirited us out of the yard; several more minutes went by before I emerged from the bathroom.

We were in indisputable countryside outside Cheyenne by the time I took my rightful seat in the engineer's chair. Relieved though I was, I found myself on a slowpoke of a train. By hopping a low-value bulk-commodities train, I'd chosen less attention from the bull in exchange for drastically less speed.

For the next 21 hours, we were likelier to go 25 mph than not, only occasionally bursting into 50 mph, while all sorts of hotshots with higher-priority consists sidelined us on their 79-mph journeys. Maybe we were carrying cargo from some ultra-dense star like Sirius B, given the stately pace my train set through the scrublands. The views were expansive, boundless, framed by that towering, cloudless Western sky that I indescribably miss, but it was sagebrush out there and would be for the next night and day. The landscape generally looked like this: 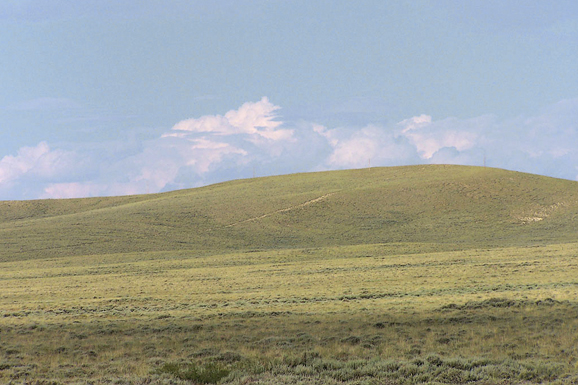 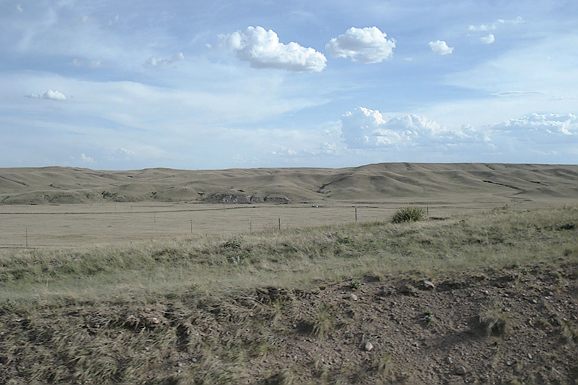 Another reason for the train's crawl was Sherman Hill, the highest point on the Overland Route, en route to Laramie. It took so long to work up the grade that night fell long before we reached Laramie, only about 40 miles away.

In southern Wyoming, the landscape was so overwhelming in its darkness that I welcomed the light-polluting signs of hotels and restaurants as a break in monotony. Before and after Laramie, it was earth without form and void.

Fortunately, I was still awake after 2 am as we pulled into (town name omitted). It's no crew change - Cheyenne and Green River are - but I sat bolt upright in dismay as we slowed to a crawl approaching gantries with fuel pumps hanging down the sides. It was a refueling and inspection stop. 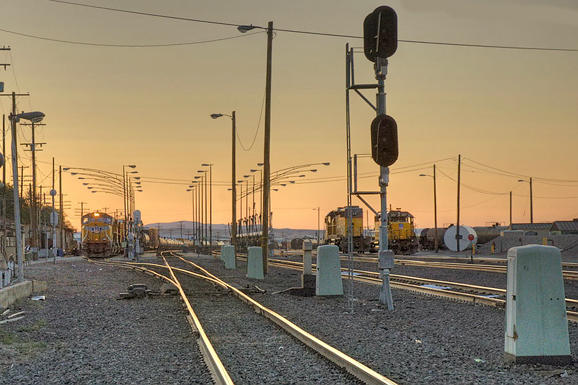 The voice of experience shouted in my ear: "You have 1 minute to hide!"