On a warm summer night in June, 1978, I caught out of Oakland on an eastbound (where else?) pig train, intending to ride for a day, then turn around and come back - a nice way to spend a weekend, eh? Unfortunately, a hurried attempt to catch out on the fly led to a catastrophe so heinous as to defy description. Stopping at a liquor store deep in the heart of Darkest Oakland on my way to the freightyard, I purchased a "nouveau" bottle of Gallo White Port, and deposited it in my pack, surrounded by my sleeping bag for "safety". As luck would have it, the walk from town to the yard allowed to bottle to settle to the bottom of my pack, with a down cocoon surrounding it on all sides except the bottom. Running along side the train, I foolishly took off my pack and tossed it aboard the piggyback car, and in moments after settling behind the wheels of the trailer I began to notice a "wine-like" odor emanating from my pack. It was now almost 1:00 am and we're going full tilt down to Niles and, not only do I have NO wine to drink, but I've got a sleeping bag full of port wine and broken glass! In the wind and the darkness I try to clean out my bag as best I can, then crawl inside for what has got to be the most miserable train ride that I can remember. 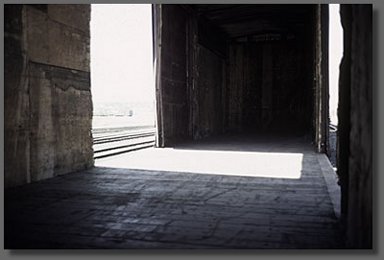 I bailed off in Oroville the next morning to restock and get some breakfast. The waitress at the café pointed out that yes, she did detect a faint odor of wine on my person, although my statement that I hadn't a drop to drink probably fell on deaf ears. Now fortified with a hearty meal, drier clothes, a new "intact" bottle of wine (with a few beers for chasers) I hit the yard and settled down in the boxcar shown above. 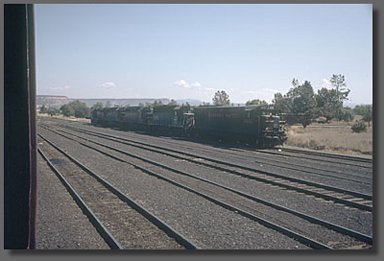 As the day warmed and the beers departed, I was lulled into the familiar trance-like state of "waiting-for-a-train". Whether I left in the next few minutes or the next few days, I really didn't care. I did, however, seize upon the period of inactivity to hang out my sleeping bag to dry. As much as I like the smell of wine, the combination of it melding into a sleeping bag that hadn't been washed in decades became a bit much. Sometime in mid-morning, I was awakened from a delicious slumber by the sound of power moving up to the head end of the string of cars I was on - three Western Pacific units, one Burlington Northern, and another Western Pacific, shown above. 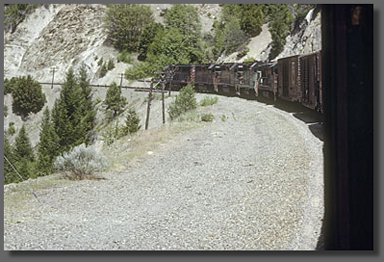 With all of the empty boxcars on my train, I figured it would turn north at Keddie, and I was right. as the photo above shows my train curving north after crossing the railroad trestle just west of what passes for "town". 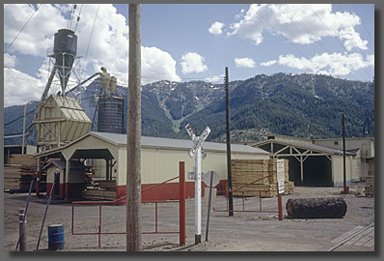 Climbing out of the Feather River Canyon, our first stop (of many) was at this mill in Crescent Mills, CA. This gave me time to stretch my legs, but the sheer inefficiency of the railroad was brought home in the almost two hours it took us to switch out a few cars. 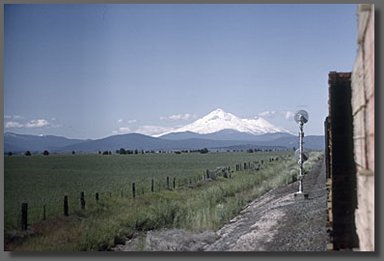 Crawling along on bumpy track, we managed a crew change at Bieber, then an equally slow trip for almost a hundred miles into Klamath Falls, OR. I crashed in the yard and (barely) caught a southbound lumber drag the next morning headed down to Dunsmuir. The only ride I was able to get was the back of a flatcar (not a bulkhead, a flatcar), shown above looking south toward Mt. Shasta. 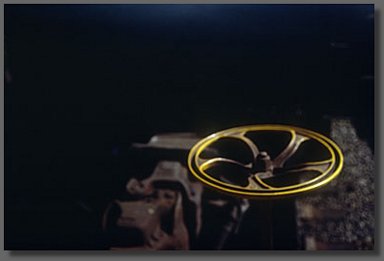 If there ever was an incredibly slow train that I had ridden... anywhere... it was forgotten after this ride. Leaving Klamath in the morning, it was dark before we made it to Dunsmuir, a paltry 90 miles away. Most of my time was spent gazing upon the brakewheel at the end of my flatcar, shown above.