In July of 1981 I took a trip from Oakland to Denver and back. This was one of my first "longer than usual" rides and it would be the first time that I'd ever seen anything east of the Rockies. The picture below, though not much to look at, is memorable to me, anyway, because it shows sunrise as we were winding down the east slope into Denver. I would have preferred to have gotten out of my sleeping bag a few minutes earlier so as not to be blinded by the reflection of the sun on some ponds below us. It was weird seeing the flat-as-a-board Plaines after riding for two days through country that seemed to sprout a new mountain range every few miles. 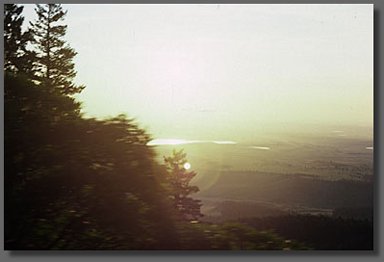 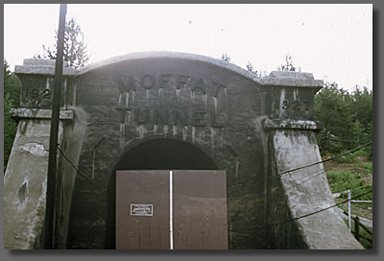 After poking around Denver for a day or so I made it out to the Rio Grande yard and caught a westbound train only minutes after entering the yard. At least I hoped it was a westbound train, as it had lots of empty boxcars and lumber flats, and seemed to be pulling out of the yard in a more or less westerly direction. I was in a strange yard with no time to scout around, but the site of all of those empty boxcars creeping along was too much to pass up, so off I went. I breathed a sigh of relief when I began to notice familiar (since the last few days, anyway) scenery and knew for sure I was on the right train when we entered the Moffat Tunnel [above]. 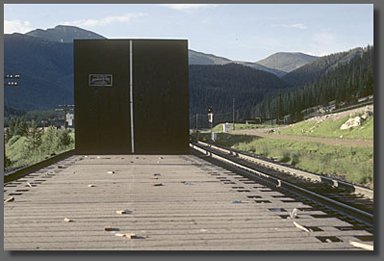 With a warm day, an early start, and scenery that I didn't see on my way out because of darkness, I settled down on the back end of the bulkhead with a bottle of White Port and indulged myself. Going from what seemed like hours in the black tunnel to popping out at Winter Park [above] reminded me of the sequence in "The Wizard of Oz" when everything changes from black & white into color. 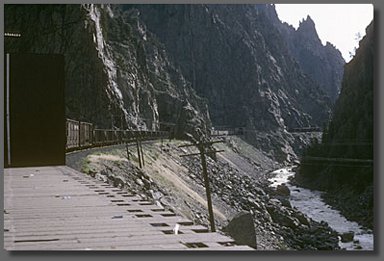 Lots of time was spent cruising along in narrow gorges like this [above] alongside the Colorado River. 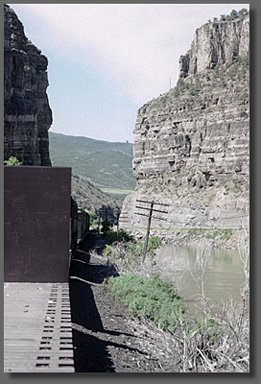 Another picture of what a good portion of this route looks like [above] and [below]. 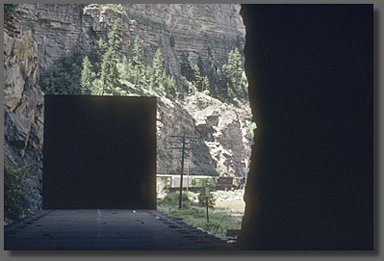 I got back to the Rio Grande yard in Salt Lake City early in the morning and sacked out for a few hours, as the long (and windy) ride across Utah on the open bulkhead wasn't condusive toward deep sleeping. I stocked up on food (and wine), took the city bus up to the Union Pacific yard, and caught an Oakland-bound pig train, shown going through the Palisades of Nevada [below]. 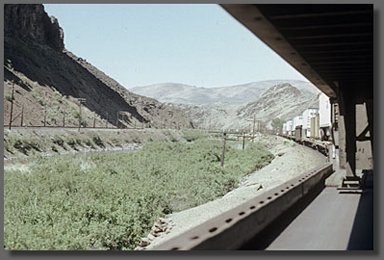 After another day (and night) on a windy ride, this time across Nevada and a good part of California, I needed to get off and remind myself what it felt like to walk on terra firma again, so I bailed off in Stockton, hit a convenient liquor store, and passed by an eastbound Western Pacific train [below] as I walked back into the yard to wait for a ride to Oakland. 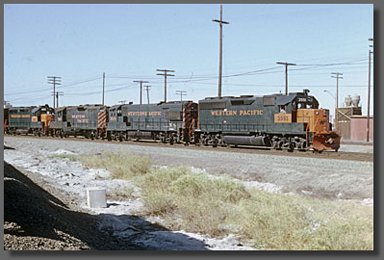